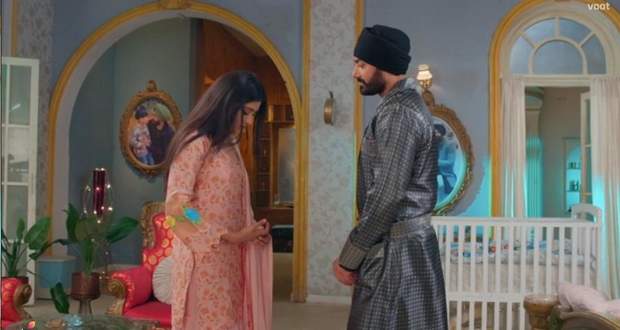 Today's Choti Sardarni 16 Sep episode starts with Vikram apologizing to Aditi for his mistake. Aditi forgives him and gets ready to marry him.

Vikram and Aditi complete their engagement ceremony, while Sarabjeet plans to propose Meher. Harleen requests Sarabjeet’s mother to invite limited people in the marriage because of the pandemic.

Later, Meher praises Sarabjeet for choosing a beautiful ring for Aditi’s engagement. Sarabjeet expresses his feelings to Meher and puts the ring on her finger.

Meher says that she doesn’t get any ring for Sarabjeet and prepares a ring with a thread. Param arrives there and informs Sarabjeet that some people have arrived to meet him.

Sarabjeet gets shocked to learn that there is a summon for Meher for physically assaulting a police officer in Serbia. The officials inform Sarabjeet that they are here to take Meher to Serbia along with them.

Sarabjeet tries to give an explanation to the officials, while the lady officer tells Sarabjeet that she has to take Meher into custody. Sarabjeet requests them not to arrest Meher and promises them that he will bring Meher to Serbia after her sister’s wedding.

Meher questions Sarabjeet about the matter, while Sarabjeet lies to her and goes to his room. Sarabjeet makes a call and asks the lawyers to be on the video call the next morning.

Meher arrives there and asks Sarabjeet to tell the reason for his serious mood. Sarabjeet informs her about a summon from Serbia.

Sarabjeet tells Meher to not to worry and says that he will take care of everything. Meher tells him that she will not leave the kids alone at the home.

Param arrives there and takes a promise from his parents not to travel anywhere without him.

Upcoming Choti Sardarni episode update: The lawyer informs Sarabjeet that Meher will be put in jail.