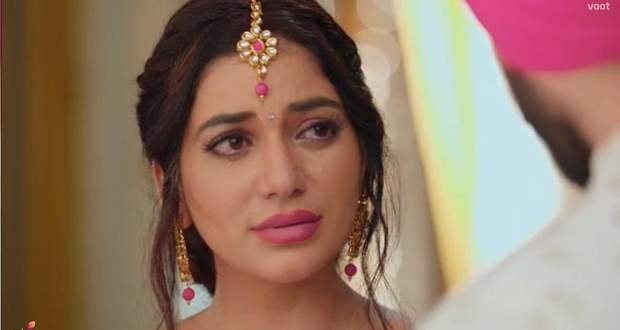 Today's Choti Sardarni 18 Sep episode starts with Harleen asking Sarabjeet and Meher to give Aditi a surprise. Meher asks Sarabjeet to not to tell Harleen about the summon.

Sarabjeet and Harleen give a surprise gift to Aditi and make her the equal shareholder in all the assets of the Gill family. Aditi gets emotional and starts missing her mother.

Ginni arrives there and informs everyone that the Haldi ceremony will begin at 11 am. Meanwhile, Vikram’s father scolds Vikram for going to the office on his Haldi function day.

Vikram feels weird about his father discouraging him regarding his case, while Vikram’s mother encourages Vikram and asks him to get ready for the function.

Everyone enjoys the Haldi ceremony and starts the function at the Gill family. Sarabjeet records the function in his camera, while Meher asks Sarabjeet to apply Haldi to Aditi.

Aditi feels grateful to Meher for helping her meet her family and wishes that Meher never has to face any distance from her children. Sarabjeet gets a call from his lawyer, while Meher gets a wound on her feet by a sharp thing.

Sarabjeet lifts Meher in his arms and then applies Haldi on Meher’s wound. Later, they both start teasing each other and apply Haldi to each other. Arpita tells Meher that Sarabjeet is just made for him.

She tells Meher that she is lucky to have a husband like Sarabjeet. Meher gets a video call from Vikram’s mother Seema to know about the Haldi ceremony.

She shows Vikram’s Haldi ceremony on the video call, while Kulwant takes the phone and witnesses a big scar on Vikram’s back.

She realizes that the scar is in the same place where she stabbed a knife at Manav’s back and gets confirmed that Vikram is none other than Manav.

© Copyright tellybest.com, 2018, 2019, 2020. All Rights Reserved. Unauthorized use and/or duplication of this material without written permission from tellybest.com is strictly prohibited.
Cached Saved on: Tuesday 1st of December 2020 01:30:16 PM