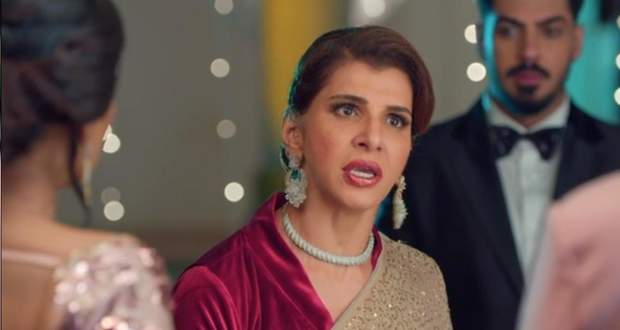 Today's Choti Sardarni 19 Oct episode starts with Sarabjeet and Meher promising to support each other always. Param asks them to cut the anniversary cake.

Manav gets drunk and Aditi stops him from drinking too much. He behaves weirdly with her and asks her to not to touch him.

Suryapratap comes there and asks Aditi to leave Vikram for some time. Manav tells Suryapratap that he is always ditched by the people he loves.

He then witnesses Meher and Sarabjeet happy together and recalls his good time with Meher. He gets emotional and keeps on drinking a lot.

Aditi tries to take the bottle from Manav, while Meher sees Manav standing alone and questions him if he is doing good.

Manav says that he knows that she loves him, while Meher asks him if he is drunk. She tells him that Sarabjeet has decided to get Kulwant, Bittu and Rana punished for their deed.

Sarabjeet and Meher call Kulwant in the room, while Sarabjeet demands Kulwant to surrender to police for Manav’s murder case.

Kulwant shocking asks her crime and Sarabjeet says that he knows she has killed Manav. Kulwant denies the allegation and asks Sarabjeet to believe her.

Meher lashes out her anger on Kulwant and tells her that she has confessed everything to Sarabjeet. Further, Sarabjeet threatens Kulwant to surrender to police, while Kulwant says that no one can arrest her without any proof.

Kulwant tells Bittu and Rana that Sarabjeet is planning to send them behind the bars. She goes to Manav and lies to him that Sarabjeet and Meher want to talk to him in the lawn.

She asks Vikram Deewan to tell everyone that Manav is alive and she is not responsible for any murder. Manav finds himself in a dilemma on thinking about Seema and tells everyone that Kulwant is innocent.

Bittu and Rana spoil her game by their stupidity and indirectly tell Sarabjeet about Manav’s murder.

© Copyright tellybest.com, 2018, 2019, 2020. All Rights Reserved. Unauthorized use and/or duplication of this material without written permission from tellybest.com is strictly prohibited.
Cached Saved on: Thursday 26th of November 2020 09:08:42 AM