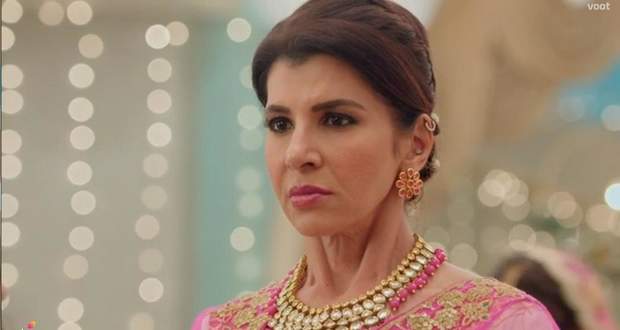 Today's Choti Sardarni 19 Sep episode starts with Kulwant witnessing a big scar on Vikram’s back. Aditi informs everyone that someone shot a bullet in Vikram’s back and she operated him to remove that bullet.

Vikram’s mother Seema witnesses Vikram getting emotional and asks him the reason for it. Vikram tells her that he got emotional because her dream is coming true.

Param informs Meher that someone has arrived to get her to sign on some documents. Harleen questions Meher about the sign, while Sarabjeet arrives there and handles the situation.

Sarabjeet tries to make Param understand that he is a smart boy and he should be independent. Param starts crying and tells them that he cannot live without both of them.

Later, the Mehndi celebration begins and everyone enjoys it together. Meher expresses to Sarabjeet that she cannot even imagine her life without him.

Vikram and his family arrive at the Gill mansion with Aditi’s Mehndi. Vikram informs Kulwant that Manav will reach Amritsar the next morning and scares her by saying that Manav wants to talk something urgent to her.

Param asks Meher to apply Mehndi on her hands, while Amrita writes Sarabjeet’s name on Meher’s hands with Mehndi. Seema asks everyone to get ready to play a game.

Aditi questions Seema about the game and Seema tells her that husbands have to identify their wives who will be fully covered with Dupatta. Meher’s brother Rana comes first to identify his wife.

He blindfolds himself and falls down while identifying his wife. Vikram comes next to identify his bride Aditi, while Sarabjeet wishes him the best of luck.