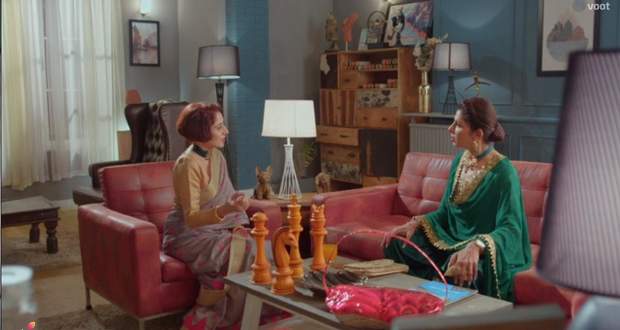 Today's Choti Sardarni 1 Oct episode starts with Meher and Sarabjeet working hardly as servants at Martha’s place. Kulwant questions Seema about her children and she tells Kulwant that she never saw Vikram for 25 years.

Martha behaves rudely with Meher and Sarabjeet, while Kulwant understands that Seema never saw her son and that’s why Manav is disguised as Vikram.

Sarabjeet is allergic to dust but Martha calls him duffer for doing drama of being allergic to dust. Elsewhere, the kidnappers get to know that Param is Sarabjeet Singh Gill’s son and plan to get a huge amount in exchange of Param.

Martha gives Sarabjeet a simple bread to eat and Meher recalls how Sarabjeet eats like a king. She feels guilty for Sarabjeet giving so many sacrifices for her.

Later, Kulwant goes to the Gill mansion and has a conversation with Vikram. This makes him recall how Kulwant tried to kill him by stabbing a knife.

He gets angry and breaks the glass in his hand, while Meher starts crying on seeing Sarabjeet facing so many things for her.

Sarabjeet tries to make Meher understand that they have to do all these things to win the case. They both make each other eat food by having fun together.

Meanwhile, the kidnappers behave very badly with Param and then calls Meher and Sarabjeet but they find their phones unreachable.

© Copyright tellybest.com, 2018, 2019, 2020. All Rights Reserved. Unauthorized use and/or duplication of this material without written permission from tellybest.com is strictly prohibited.
Cached Saved on: Tuesday 1st of December 2020 02:16:36 AM