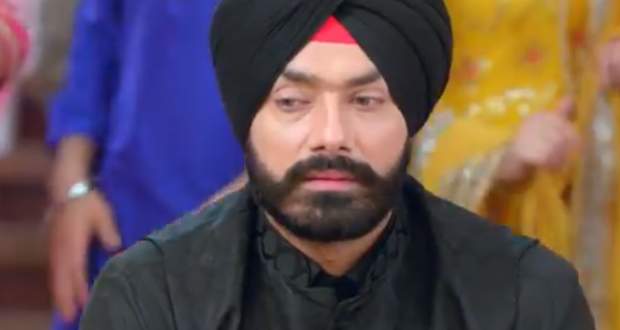 Today's Choti Sardarni 20 Mar episode starts with Dolly receiving blackmailers call who demands 2 more crore rupees. He threatens to leak the photographs if she doesn’t give the money till the next day.

Sarabjit calls everyone in the living room but is not able to find the video of Peri. A flashback reveals that Harleen promises Sandhu that she will delete the video.

Harleen also manipulates Param and asks him to open Meher’s phone. Harleen opens the phone and deletes the video. Sarabjit is confused while Harleen criticizes Meher.

Sarabjit clarifies that Param had sent messages to Ginnie. Mini says that Ginnie was pregnant while Harleen asks Sarabjit to reveal the truth to Kulwant.

At Kulwant’s house, everybody is enjoying the wedding while Meher reveals the truth about getting proof against Peri to Amrita. Meher is sure that Peri will suffer because of the video.

Sarabjit arrives at the same time and Meher also comes downstairs. Jeeto wants to perform the Jaggo ritual with Sarabjit while Meher asks not to tease him.

Meher is asked to make Sarabjit stand without touching and calling out for him. Meher falls backward and Sarabjit stands up to catch her.

He further asks Meher to talk to him in private. Meher wants to know how everyone reacted to the video while Sarabjit reveals that there is no video. Sarabjit further wishes to reveal the past of Ginnie.