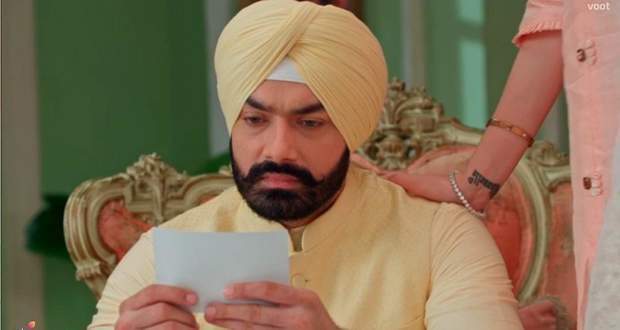 Today's Choti Sardarni 26 Aug episode starts with Aditi informing Vikram that Sarabjeet invited him to his place. Vikram questions Aditi about the death anniversary at Sarabjeet’s house and she hangs up the call saying that someone arrived.

Harleen reveals their father’s truth to Sarabjeet and tells him that their grandfather never allowed their father to accept his second family. Meanwhile, Kulwant gets unconscious on knowing the fact that Manav is still alive and is disguised as Vikram Diwan.

Later, Kulwant regains consciousness and tells her sons that Manav might charge an attempt to murder case on them. She gets scared and asks Rana to make a call to Meher.

Param informs Aditi that Lalita broke his nebulizer and asks Aditi to get a new one for him. Elsewhere, Vikram makes a call to his servant at Delhi's house and compliments him for making Kulwant believe that Vikram is disguised as Manav.

Vikram arrives at Aditi’s house to get the script of the play but finds out a childhood picture of a girl with Guddi written over it.

Sarabjeet decides to search for his other sister, while Aditi says that she will never forgive Sarabjeet and Harleen as she thinks that they both are the reason for her mother's death.

Meher teases Sarabjeet that he will not remember his dialogues of the play. Sarabjeet tries to prove her wrong but forgets his lines. Meher, to complete Sarabjeet's dialogues, ends up expressing her feelings to him.