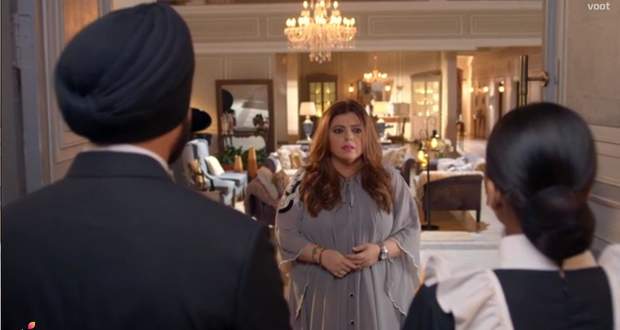 Today's Choti Sardarni 29 Sep episode starts with Harleen informing Sarabjeet and Meher that Amrita took Karan with her. Param requests Meher to call Jagga and ask him to bring Karan to him at the Gill mansion.

Vikram runs fastly on the treadmill on recalling the life story of Vikram told by Surypratap to him. He starts bleeding and Aditi stops him from running.

She changes his bandage and tries to talk to him but Manav ignores her. She informs Vikram that his mother is feeling weak.

Meanwhile, Sarabjeet and Meher plan to disguise as a babysitter and a domestic helper to meet Martha.

Seema reaches home and Manav asks her about her fast. He hugs her on witnessing her care towards him and recalls that her real son died in an accident.

He recalls how Suryapratap requested him to not to confess his truth to Seema otherwise she would die by getting that shock.

Later, Param makes a video call to Yuvi to talk to Karan. He asks Yuvi to give his address to him so that he could come and meet Karan.

Aditi and Manav reach Gill mansion for the post-wedding ritual. Harleen and Bobby welcome both of them, while Param gets ready to leave from the Gill mansion.

Vikram keeps on questioning about Meher and Sarabjeet’s trip and Aditi asks him to leave his interrogation for some while. Manav gets a call from his colleague and he informs Manav that Sarabjeet and Meher are in Serbia.

Martha gets angry with Sarabjeet and Meher and shouts at both of them to leave from her house.