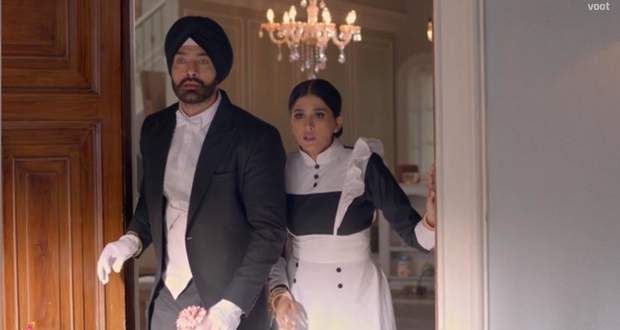 Today's Choti Sardarni 2 Oct episode starts with Manav going to the washroom and recalling how Kulwant tries to kill him. He sees himself as Manav in the mirror and starts talking that Meher’s prayers have saved him.

Meher and Sarabjeet wait for some miracle to happen, while Martha’s daughter Angel throws things on both of them. Elsewhere, Manav hugs his mother Seema before leaving for Serbia.

Meher and Sarabjeet get shocked to see Angel sitting on a wheelchair. Martha informs them that Angel met with an accident three years ago and she is not able to walk at her own.

The kidnappers get angry on not being able to connect to Meher and Sarabjeet’s phones, while Martha listens to Meher saying that she can cure Angel’s health problem.

Meher informs her that her grandfather used to cure many problems like the one Angel is suffering from. Martha taunts her and tells her that she consulted many doctors but no one was able to cure her.

Meanwhile, Harleen gets a video call from the kidnappers and they ask her the ransom of 50 crores to free Param. Harleen gets ready to pay them the amount and requests them to not to harm Param.

Martha gives permission to Meher as she assures her that she can cure Angel by the Ayurveda, but Angel refuses to get treated by her.