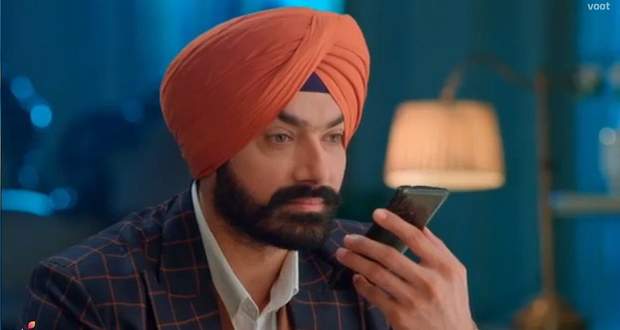 Today's Choti Sardarni 2 Sep episode starts with Kulwant arriving at Vikram’s house with the food sent by him. She asks Vikram if he has added any poison in the food.

Aditi recalls Param’s affection and regrets for thinking to harm him. She decides to withdraw her plan of using Param against Sarabjeet and Harleen.

At the same time, she gets a call from Param and he asks her to come to the Haryali Teej function at Gill mansion the next day. Aditi refuses to come to the function and Param asks Meher to convince Aditi. Meher takes the phone and requests Aditi to attend the function.

Aditi apologizes to Sarabjeet for her betrayal to him. Later, Sarabjeet requests Aditi a lot to attend the function and she agrees to come to the Gill mansion.

Meanwhile, Kulwant tells Vikram that she knows about his identity. Vikram tries to make Kulwant confess the truth about Manav's sudden disappearance. Kulwant witnesses the CCTV cameras fitted at Vikram’s house and act that Manav was blackmailing her daughter Meher.

The next day, Harleen gets tensed to not find flowers for the function. Meher and Param arrive there and tell Harleen that they both have made hand-made decoration stuff.

Harleen asks Meher if Sarabjeet got ready for the function or not. Meher informs her that Sarabjeet is getting worried about thinking of his second sister Guddi.

Harleen goes to meet Sarabjeet, and he gifts Harleen a diamond necklace on account of Teej. Harleen tells him that she wants him to be happy always.

Aditi gets ready to attend the function at Gill mansion, while Vikram arrives at her house and tells her that he will also join her in the function.

Aditi refuses to take him along with her and Vikram doubts on Aditi to have any personal connection with the Gill family. Aditi tells Vikram that she has a social life and she doesn’t want to spoil it because of him.