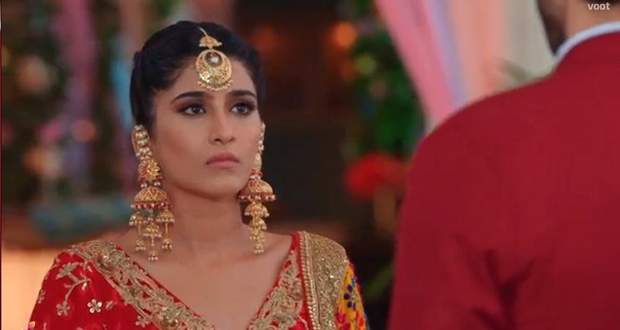 Today's Choti Sardarni 3 Sep episode starts with Meher getting emotional on recalling her childhood memories with her brothers. Her brother Jagga comes in front of Meher and asks her to not to cry.

Jagga tells Meher that Sarabjeet made all the arrangements for him so that he could come to Amritsar. Everyone meets and greets Jagga and spends a happy moment together.

Later, Aditi and Vikram reach Sarabjeet's house at the same time. Aditi gets shocked to see Vikram and scolds him for coming to Gill mansion. Vikram informs Aditi that he is a CBI officer and he cannot pause his investigation.

Meher overhears their conversation and tells Vikram that he cannot do his investigation at the Gill mansion without any warrant. Aditi requests Vikram to not embarrass her anymore and asks him to leave from there.

Meher orders her security guards to not let Vikram enter the Gill mansion. Vikram sees Sarabjeet at the main gate and gives him a call.

Sarabjeet invites Vikram to attend the function and asks him to stay in his limits until the function is over. Meher questions Sarabjeet about his decision, while Sarabjeet asks Meher to calm down and not to worry about anything.

Elsewhere, Vikram hears Karan crying and goes inside the room to see Karan. Vikram holds Karan in his arms and tries to calm him down. Param gets surprised to see that Karan has stopped crying when Vikram was talking to him.

Everyone starts enjoying the function, while Bittu and Rana hide from Vikram and makes a call to Kulwant to come quickly at the Gill mansion. Meanwhile, Jagga sees Vikram and misunderstands him as Manav.

He recalls the time when Manav came to his workplace to meet Jagga. He goes to meet Vikram and asks him if he has started the catering business. Vikram tells Jagga that he wants to talk to him, while Meher arrives there and introduces Vikram as a CBI officer.