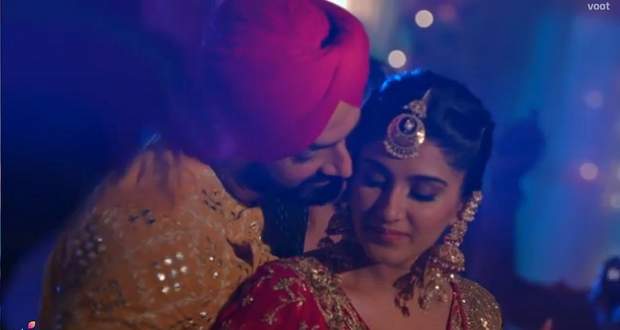 Today's Choti Sardarni 4 Sep episode starts with Jagga getting shocked to know that Vikram Diwan is Manav’s lookalike. Meher informs Jagga that Sarabjeet knows Manav and he even met him once.

Meanwhile, Vikram halts Rana’s way and questions Rana about the money given to Manav by Kulwant. Meher arrives there and gives Vikram the house keys of Gill mansion out of frustration.

Meher tells Vikram that he has half an hour to complete his investigation and after that, he will never enter Gill mansion. She warns Vikram that if anything wrong happens to her family then she will not spare him.

Vikram taunts Meher something about the knife and this leaves Meher speechless. She recalls the time when Kulwant stabbed a knife at Manav’s back.

Later, everyone enjoys the function and Param asks Meher to come and dance. Sarabjeet and Meher dance together and get lost in the moment.

Param asks Meher to come in front of everyone so that Sarabjeet could kiss her out of love. Elsewhere, Vikram follows Bittu and Rana and interrogates them about Manav.

Vikram asks both of them to stand facing against each other’s back with their mobiles and to type the amount given to Manav by Kulwant. Kulwant witnesses Bittu and Rana in danger and tries to tell them the amount by talking to someone on a call.

Everyone asks Sarabjeet to lift Meher in his arms. Meher refuses to Sarabjeet, but Sarabjeet lifts her, and everyone claps for both of them.

Kulwant meets Vikram and tells him that no one can challenge her. Vikram informs Kulwant that he knows how to get a person on the right track.