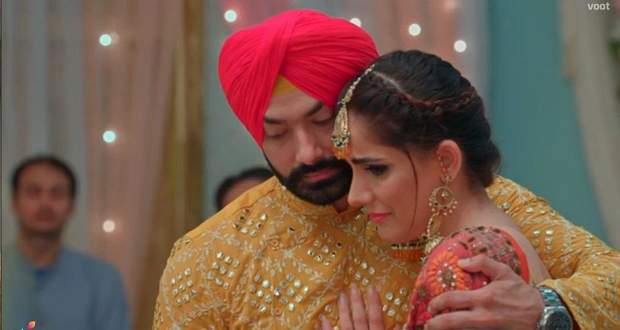 Today's Choti Sardarni 5 Sep episode starts with the Gill family enjoying the function with everyone. Aditi gets a call and she goes outside to attend it.

Sarabjeet decides to disclose a secret along with Harleen and Meher. Sarabjeet informs everyone that he has a step-sister from his father’s second marriage, and he will try his best to find her. He tells everyone that he and Harleen will give all the respect and love to their step-sister.

Kulwant asks Sarabjeet about his step sister’s information, while Harleen answers Kulwant that they only know their sister’s name Guddi. Sarabjeet tells them that Guddi has an oval birthmark on his neck.

Vikram recalls the photograph he found at Aditi’s house with Guddi written on it. He starts recording Sarabjeet and Harleen reciting their father’s poem.

Later, Aditi witnesses Sarabjeet upset and questions him about his emotional mood. Sarabjeet tells Aditi that he got emotional in thinking about her marriage.

Elsewhere, Vikram asks Aditi to leave for the hospital in her car, and he will leave for his office in his car. Vikram intentionally punctures his vehicle and starts acting in front of the Dhillon family.

Vikram asks Jagga to give him a lift in his car, while Jagga agrees, and he asks Amrita to come in Bittu’s car. Meher comes to hand over Jagga his mobile phone and gets surprised to see Vikram sitting in Jagga’s car.

Later, Harleen questions Meher about her upset mood. Meher informs Harleen that she doesn’t find Vikram a good guy and tells her that Vikram asked her brother Jagga for a lift.