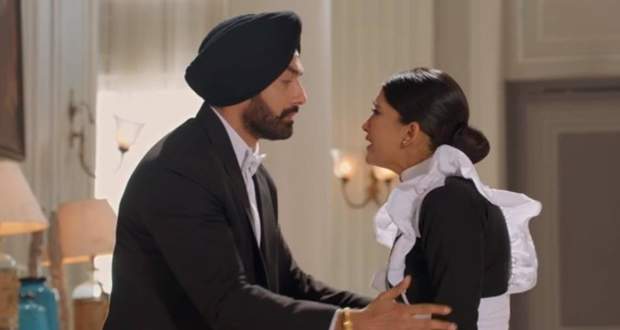 Today's Choti Sardarni 6 Oct episode starts with Manav following Meher’s lawyer to find Meher’s location. He recalls his plan to give Harleen’s number to the lawyer to find out about Sarabjeet.

Manav witnesses Sarabjeet working as a servant in Martha’s place, while Martha scolds Meher’s lawyer for coming at her place.

The security guard of Martha hands over the letter to Sarabjeet and he gets shocked to know that Param is kidnapped. Meher and Sarabjeet break down emotionally and tries to look for their phones everywhere.

They both try to make a call from the landline but couldn’t connect with anyone. Sarab then tries to connect to his family through the video call.

Harleen asks Sarabjeet to come quickly to India and tells them that she can’t handle the situation alone.

Meher gets a mental breakdown and asks Sarabjeet to take her to India. Sarabjeet decides to leave for India alone and tells Meher that she has to stay in Serbia.

They both get emotional and Sarabjeet asks Meher to give him a promise that she will come back to India after winning her case.

Further, they both ask the security guard to ask Martha to let Sarabjeet bring medicines for Angel. Manav witnesses Meher crying outside the house and mutters that he will always keep her happy.

© Copyright tellybest.com, 2018, 2019, 2020. All Rights Reserved. Unauthorized use and/or duplication of this material without written permission from tellybest.com is strictly prohibited.
Cached Saved on: Tuesday 1st of December 2020 01:28:04 PM