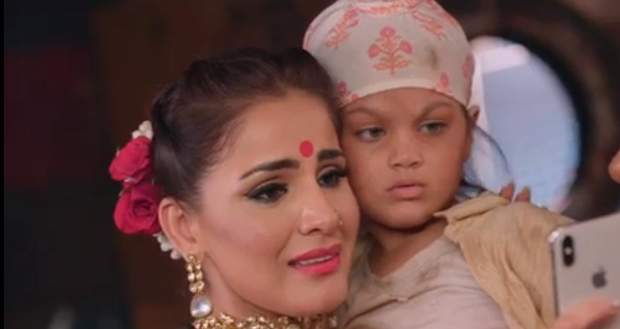 Today's Choti Sardarni 7 Oct episode starts with Manav trying to meet Meher outside Martha’s house. Meher gets into the house and Manav is taken to the police station by Serbia police.

Later, Meher asks Harleen to take some action against the kidnappers without waiting for Sarabjeet to reach India.

She asks Kulwant to call Champa to the Gill mansion for some urgent work, while Angel takes her laptop from Meher and orders her to make Jalebis for her.

Sarabjeet requests his lawyer to take care of Meher in Serbia. He later makes a call to Vikram and asks him if he has got any information about Param.

Meanwhile, Meher makes a video call to Champa and questions her about the kidnappers Bichu. Champa informs Meher that Bichu doesn’t leave any child alive after the kidnapping.

Meher tells a plan to Champa to enter Bichu’s place, while Angel calls Meher in her room by throwing things here and there.

She orders Meher to play with her but Meher says no to her and goes to use the laptop. Elsewhere, the Gill family disguises as Kinnar and accompanies Champa to Bichu’s place.

Meher witnesses all the scene through the hidden camera, whereas Angel again takes her laptop but Meher snatches it from Angel’s hands.

Sarabjeet makes a call to Meher and she merges the call with Harleen’s video call. Angel intentionally tries to turn off the broadband but Meher rushes to her and asks her to not to disturb her.

Harleen and her partners make the kidnappers unconscious and Harleen rescues Param hidden behind the blocks.

Meher and Sarabjeet feel grateful to God for helping them find Param safe. Sarabjeet asks Harleen to get Param’s full body checkup and say thanks to Kulwant for saving his son’s life.

Meher hugs the laptop out of happiness, while Angel comes with a pair of scissors and stabs it on Meher’s back.