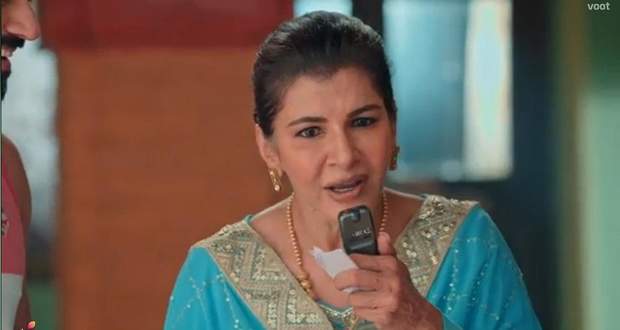 Today's Choti Sardarni 8 Sep episode starts with Sarabjeet acting of being drunk. Param video calls Yuvi to show him Sarabjeet’s acting and Yuvi drops the transmitter on the bed.

Kulwant warns Bittu and Rana that Vikram will not spare them if he finds any evidence against them. Meanwhile, Sarabjeet falls on Meher while getting off the table, and they both continuously have eye contact with each other.

Sarabjeet questions Meher about his acting skills, while Meher teases Sarabjeet and they both laugh together. Sarabjeet asks Meher to support him in his plan and to call Aditi for dinner at the Gill mansion.

Later, Aditi informs Vikram that Meher has invited them to dinner at their house. Vikram gets suspicious of Meher’s sudden kind gesture.

The next morning, Kulwant witnesses her grandson Yuvi playing with a device. She finds out that Vikram took a lift from Jagga to fit that device in her purse.

Kulwant screams and tells everyone that the device is a bomb and asks everyone to rush out of the house. Jagga arrives there and gets surprised to see everyone standing with their ears closed.

He gets into the house and makes a call to his friend to check that device. Later, Jagga’s friend informs everyone that the device is a microphone.

Elsewhere, Vikram and Meher rehearse for their plan to know Vikram’s truth. Param arrives there and informs them that Vikram and Aditi reached for the dinner.

Vikram hears Kulwant talking about Manav, while Kulwant along with Bittu and Rana intentionally misleads Vikram by providing him wrong information about Manav.

Aditi takes off Vikram’s earphones and scolds him for being distracted somewhere else. Sarabjeet and Meher welcome Aditi and Vikram at their house and Aditi feels grateful to Sarabjeet for considering her a family member