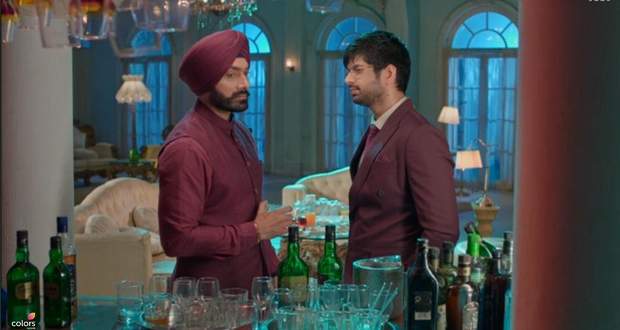 Today's Choti Sardarni 9 Sep episode starts with Sarabjeet asking Vikram to have a drink together. Vikram recites his poetry to everyone and Meher questions Aditi about her first relationship.

Vikram questions Sarabjeet and Meher about how their relationship started. Sarabjeet recalls her first meeting with Meher and tells everyone that Meher misunderstood him as a thief.

Vikram makes a drink for Sarabjeet and this makes the Gill family tensed. Meher intentionally offers juice to Sarabjeet so that Vikram doesn’t let Sarabjeet have a drink made by him.

Later, Harleen asks Vikram and Aditi about their relationship, while they both tell everyone that they are together from the last few months.

Meher recalls Manav’s death and drops the food tray on thinking about it. Vikram informs the Gill family that he met Aditi when he was admitted to the hospital.

Sarabjeet asks Vikram about his feelings for Aditi, while Vikram informs Sarabjeet that he knows that Sarabjeet doesn’t drink. Sarabjeet gets shocked as his plan to know about Vikram’s feelings got ruined.

Vikram hears Karan crying and goes to see him. Elsewhere, Meher tries to calm down Karan and gets surprised to see that Karan stopped crying when Vikram held him in his arms.

Later, Sarabjeet questions Vikram and Aditi about their marriage, while Vikram asks Sarabjeet to help him end his case, and then he will start his preparations to marry Aditi.

Sarabjeet tells Vikram that he will prove himself innocent in the scam case so that no one could point out any finger at him.

© Copyright tellybest.com, 2018, 2019, 2020. All Rights Reserved. Unauthorized use and/or duplication of this material without written permission from tellybest.com is strictly prohibited.
Cached Saved on: Saturday 5th of December 2020 05:39:43 AM