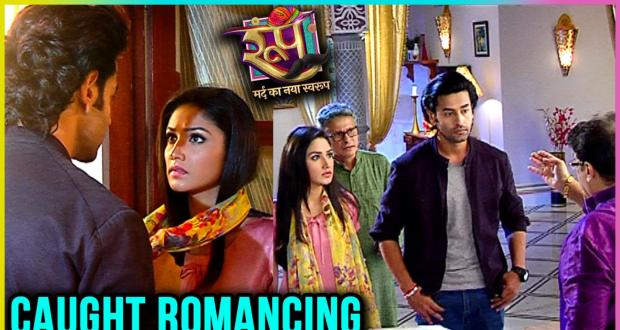 The episode starts with Roop, where he is taking Hardik to Ishika’s house. He climbs up to Ishika's window and finds that she is still awake. Ishika gets terrified to see a stranger on her window but recollects herself and opens it. She gets shocked to see Roop outside. Ishika bursts into anger and asks him to leave. Roop asks Ishika to give his money back. Ishika gives him the money and asks him to leave her house at once.

While leaving Ishika’s house Roop bumps into Ishika’s Mota Chacha. He creates a scene over it and accuses Ishika of all that. Roop starts acting like a drunkard to take the blame on him. He cleverly leaves her house. Ishika gets disappointed on Roop. She decides to teach Roop a lesson.

Next morning, Ishika comes to Roop’s house with some college friends and informs his mother that Roop barged into her house in the middle of the night and fought with her brother. Moreover, she blames Roop for bullying her in the college. Listening to which Roop’s mother gets very angry. Mota Ben tries to protect Roop from Ishika accusations. The episode ends.

© Copyright tellybest.com, 2022, 2023. All Rights Reserved. Unauthorized use and/or duplication of any material from tellybest.com without written permission is strictly prohibited.
Cached Saved on: Wednesday 25th of January 2023 10:19:21 PMCached Disp on: Tuesday 7th of February 2023 12:41:54 AM