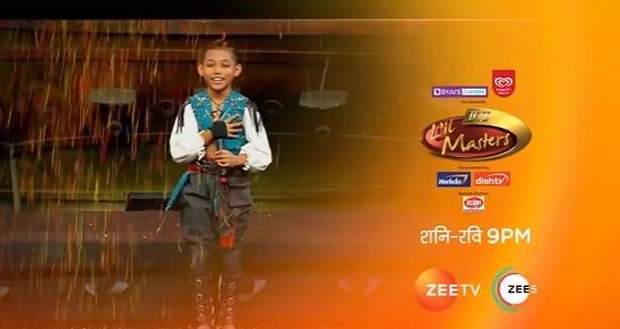 Zee Tv’s Reality Show DID Little Masters will entertain the audience with various unique dance performances given by the little masters of the show.

The recent promo for DID Lil Masters Kid Season 5 (18-06-22) for this weekend shows Nobojit from team Vaibhav performing amazing stunts which scares everyone in the judging panel.

Seeing the performance, Remo announces that Nobojit has crossed every level of excellence.

One of the other promos of DID Lil Masters 5 (18 June 2022) shows Aadhayshree from team Vaibhav performing salsa on a Bollywood son which impresses every judge.

After the performance, she asks Remo to write something on her drawing paper so that when she will go back she does not forget him.

Hearing this, Remo melts and writes down a cute massage for Aadhyashree and kisses her forehead.

Today’s DID Little Masters 5 18th June 2022 starts with Jay reminding the audience that today after all the dance performances the judges will announce the finale contastountes names and one of them will win the prize on the 26th June grand finale.

After the announcement, Nobojit from team Vaibhav gives an incredible freestyle performance.

He then gets a standing ovation from the judges and he gets a golden buzzer.

Even Sonali calls it a buzzer-breaker performance.

Further, Appun from team Vaibhav gives a killer performance on the "Apsara" song which leaves everyone stunned.

After the performance, she gets a standing ovation not only from the judges but also from the audience.

Remo then announces that Appun has always been a diamond, and Vaibhav has just polished her.

She also gets a golden buzzer from the judges.

When Jay asks Appun how she feels being a semi-finale contestant, Appun emotionally reveals that her grandpa is her biggest cheerleader.

Appun then announces that her grandpa has got a role in an Aasamiya movie.

Hearing this, Remo, Sonali, Jay along with others congratulated him.

Vartika and grandpa’s acting generates immense laughter among the audience and judges.

Further, Aadhyashree from the team Vaibhav performs salsa on the "Darling" song which stuns the judges.

After her performance, the judges give her a standing ovation.

Aadhyashree then asks Remo to write something on her drawing paper so she does not forget him.

After writing, Remo asks Aadhyashree to gift him something so he also does not forget her.

Hearing this, Aadhyashree gifts him tomato seeds and tells him that whenever Remo will see tomatoes he will think of her.

This melts Remo’s heart and he announces that DID has given him a daughter in from of Aadhyashree.

After this, Aarav from team Paul gives a gothic performance of the "Ami Je Tomar" Song.

His performance creates the perfect horror atmosphere and Remo praises Paul for executing this kind of dance on a classical song.

When Jay asks Aaarav what will do with the prize money, Aarav says that he will give this money to his father so he can open a momo restaurant.

To continue the show, Sagar from team Paul impresses everyone with his sweet performance as a lover boy.

After his performance, Remo announces that Sagar reminds him of Paul.

Sagar then reveals that he needs to win the show for his mother.

Further, Rishita from team Vaibhav showcases goddess Durga and her powers through her performance.

Her performance feels the whole set with positive energy.

Mono then says that Rishita’s performance has reminded her of Mahalaya and Devi Durga’s arrival.

Later, Sadiya from team Vartika showcases the sadness of almost every Indian girl for not being a boy perfectly with her dance.

Her performance makes everyone emotional, especially her father.

On one hand, Sagar, Nobojit, Appun, Rishita, and Aadhayshree are selected for the grand finale and on the other hand, Aarav and Sadiya are eliminated.

© Copyright tellybest.com, 2022, 2023. All Rights Reserved. Unauthorized use and/or duplication of any material from tellybest.com without written permission is strictly prohibited.
Cached Saved on: Monday 21st of November 2022 05:51:02 AMCached Disp on: Monday 5th of December 2022 01:30:40 PM