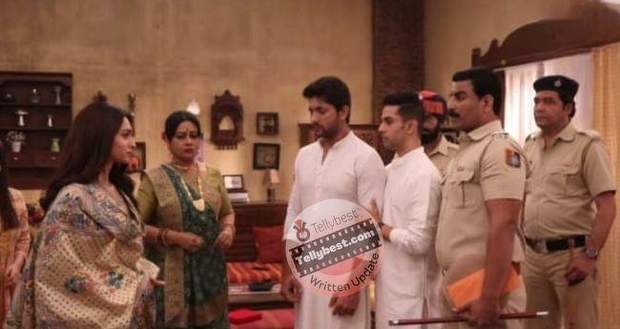 Today's Dharam Patni 10th January 2023 episode starts with Ravi pulling out the earring from his pocket and matching it with the one he found on the accident site.

Meanwhile, at Malhar's house, he complains to Pratiksha about how he has to do everything alone when Pratik comes there.

He tells Malhar that he will drop him off at the police station since he is going there for some work.

Back at the Parekh house, Hansa demands Kinjal to open the door somehow while she goes and calls Pratik.

However, due to driving, Pratik does not pick up Hansa's call and tells Malhar that he will talk to Hansa later.

Elsewhere, Ravi's father cries as he wonders why God gave his son suffering when he only wanted to be with his love.

He calls Ravi who informs him about finding out the killer and says that he is at the girl's house only.

Ravi's father tells him to send his location while Ravi says that the people coming there will be police only.

She tells him to come there with his team and arrest this Ravi who has barged into his home.

Meanwhile, Pratiksha also returns home and Kinjal informs her about Ravi barging into her room and locking himself inside her room.

At the same time, Ravi video calls the police officer and shows him the earring while telling him to come to Pratiksha Parekh's house.

Ravi comes out of the room as Pratiksha asks him what has happened.

Ravi starts rebuking Prateeksha for acting so naive while being a murderer.

Pratiksha gets shocked when Ravi tells her that she killed his Kirti and is acting innocent now.

Just then, Malhar comes there with his police team and gets happy thinking that Ravi doubts Pratiksha is the killer and not him.

Malhar threatens Ravi and tells his team to arrest Ravi for trespassing on personal property.

However, the Inspector comes there just then and tells Malhar to leave Ravi while informing them that the case is much bigger than just a trespassing case.

The inspector informs the family that Pratiksha is a prime suspect in Kirti Sachdeva's murder.

Pratik also comes there and asks what is happening while the Inspector informs him that Pratiksha is a suspect since they found her earring where Keerti's accident too place.