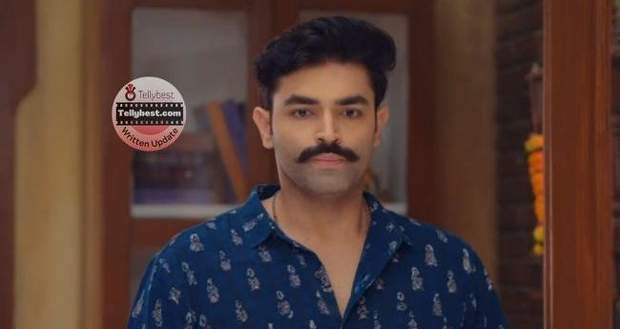 Today's Dharam Patni 11th January 2023 episode starts with Pratiksha coming in front of Ravi and telling him that she did not kill Kirti and that she even had a very pleasant last meeting with Keerti.

However, Ravi cries saying that Prateeksha made his Keerti a dream, and curses her saying that he hopes she stays like him even after she gets married.

The police officer tells Pratiksha that she needs to come to the police station while Pratik argues that she didn't do anything wrong.

The police officer shows him the arrest warrant while the lady constable tells Pratiksha to come with them.

Ravi shows her the earring that he found near the place where Keerti's accident had happened while Pratiksha tells him that she must have lost it when she hugged Keerti.

Parul and Kinjal run after Pratiksha and she consoles them while the police behave rudely with them.

Pratiksha looks at Ravi with a distant look while the lady constable pushes her into the jeep and drives away.

A little far, Jumkhi laughs as she says that the game of destiny is very amusing as the ones in destiny will meet even if they don't want it and the ones who are not destined will be taken away even if they come together.

Jhumki prays to the goddess to never leave Ravi and Pratiksha's hand while the atmosphere changes as if it's welcoming a storm.

On the other hand, Malhar thinks that he will not let Pratiksha live in jail for long and thinks that it is okay even if she got framed for the murder since she is going to be his Dharampatni soon.

Elsewhere, Ravi thinks about his moments with Kirti and cries as he says that he will make sure Kirti's killer gets their punishment.

On the other hand, Hansa tells Pratik to do something while he continues calling his connections to save Pratiksha.

Back at the police station, Pratiksha requests the police officer to hear them out while the constable comes there and informs them that the car owner has arrived.

The police inform the man that they have found the driver while the man asks if he is talking about Malhar since he is the one who had booked the car.

Further, the police officer talks to the car owner who recalls Malhar giving him money and decides not to speak much for fear of being involved in the police matter.

Pratiksha overhears their conversation and later talks to the car owner who complains about Malhar giving him less money.

Pratiksha thinks back to that day and connects the dots as she realizes that Malhar must have done the accident resulting in Keerti's death.

© Copyright tellybest.com, 2022, 2023. All Rights Reserved. Unauthorized use and/or duplication of any material from tellybest.com without written permission is strictly prohibited.
Cached Saved on: Wednesday 25th of January 2023 09:24:09 AMCached Disp on: Wednesday 1st of February 2023 07:07:58 PM