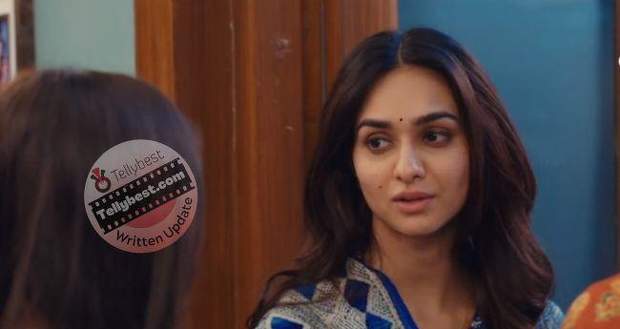 Today's Dharam Patni 12th December 2022 episode starts with both the Parekh family and the Randhawa family celebrating the good news of the engagement getting fixed.

Meanwhile, at the Randhawa house, Ravi's mother gives everyone work for the engagement while Kirti tells them that she wants to get engaged at their mansion also since she is going to live in that mansion with them after the marriage.

Back at the Parekh house, Hansa tells Pratik that they will need rings for the engagement while Pratik tells her that he knows the owner of eternal jewelers and will call them.

Ravi's mother also tells Ravi and Kirti to go to the eternal jewelers and get an engagement ring for themselves.

Ravi drops Kirti and Adi off at the jeweler's shop and goes to find a parking place while he gets stuck in traffic.

Meanwhile, Malhar and Pratiksha are on their way toward the shop when she tells him that she forgot her phone in the rickshaw and goes to bring her back.

Pratiksha goes to take her phone from the rickshaw just beside Ravi's car.

Pratiksha's dupatta flies into Ravi's car and he gets mesmerized while she leaves from there.

Ravi wonders who the girl was while the traffic clears and he goes back to the jeweler's shop.

Inside the jeweler's shop, Sandeep greets Kirti and Ravi while Malhar complains to Pratiksha that they are not getting any special treatment.

Kirti finds the Ganesha-designed ring beautiful and selects it while Pratiksha asks the employee to show her a ring with Ganesha's design on it.

Meanwhile, Malhar is outside the shop when he sees Raghu, the goon from the day when Pratiksha was kidnapped, and hides.

Kirti also sees the guy and runs after him while Ravi goes after her.

Malhar hides seeing Ravi hoping to not get beaten up again while Pratiksha sees the ring that Kirti had selected and puts it on since she likes it.

Later, Ravi and Kirti return while the seller tells Pratiksha to take off the ring since it is already booked by someone else.

However, Pratiksha fails to take off the ring and the sales lady takes her away so that Kirti and Ravi do not see her.

Kirti demands the ring that she had selected while Ravi sees the sales lady's scared expression and follows after her.

He sees the saleslady telling a lady to take off the ring since the client is demanding it and realizes the situation.

Ravi tells the sales lady to handle Kirti while he helps the lady take off the ring.

As Pratiksha turns, both she and Ravi get shocked to see each other again.

She asks him what he is doing there and he informs her that she is wearing the ring that his fiance had selected and tells her to take it off.

However, she tells him that she cannot remove the ring and they both start bantering.

An elderly couple tells them that they are a cute couple while both Ravi and Pratiksha immediately clear that they are not a couple.

The old lady tells them that they look good together while Ravi explains that he is with someone named Kirti while Pratiksha is going to marry someone named Malhar.

The lady finally tells Ravi and Pratiksha that the ring might come off with hot water and soap.

Ravi takes Pratiksha towards the washroom while Adi sees him and goes to tell Kirti about it.

Meanwhile, Kirti is irritated as she tells the sales lady that she does not want to see any other design and wants only the ring that she had selected.

© Copyright tellybest.com, 2022, 2023. All Rights Reserved. Unauthorized use and/or duplication of any material from tellybest.com without written permission is strictly prohibited.
Cached Saved on: Wednesday 25th of January 2023 01:18:56 PMCached Disp on: Wednesday 1st of February 2023 05:24:13 PM