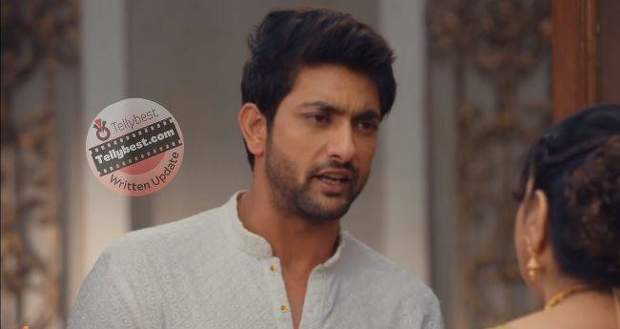 Today's Dharam Patni 12th January 2023 episode starts with Malhar coming to meet Pratiksha while she asks him to tell her the truth.

Malhar asks her what she is talking about and she tells him that he was drunk that night and could have accidentally killed Kirti.

Getting shocked at Pratiksha's intelligence, Malhar drags her to the waiting room telling her that they will talk in private.

On the other hand, Ravi is driving the car while he recalls having Keerti sit next to him which makes him cry.

He recalls his garden date with Keerti where they both enjoyed the whole day in each other's embrace while having their own little picnic.

Ravi recalls how they ran after each other and how they promised to never leave each other.

Back in the present, Ravi cries as he wonders how he will live without Keerti.

Meanwhile, at the police station, Prateeksha questions Malhar about what he was doing at the crime scene and how he knew there was an accident when he did not go there.

However, Malhar makes up a story and accidentally talks about Thakur and Raghu.

He questions Pratiksha if she is doubting him and gets violent with her when she questions him further.

Malhar realizes that he is being too harsh and starts acting nice to Pratiksha while telling her that he will get her out at any cost.

On the other hand, Ravi returns home and ignores his parents telling him to eat while going straight to his room.

Kavya calms them while telling them that she will take the food to Ravi's room and feed him.

Meanwhile, in Ravi's room, he closes the curtains making the room dim while he begs for Keerti to return.

He recalls that he had her Dupatta in his hands the last time and starts looking around for it and cries when he does not find it.

Ravi tells Kirti that he is going to order her favorite pizza and will eat it when the doors open.

Ravi smiles saying that he knew she would arrive after hearing about pizza while Kavya's heart breaks even more seeing him in that condition.

Kavya sits beside Ravi and tries to convince him to eat by saying that Keerti will always stay in his heart.

The family comes and sees Ravi telling Kavya that Keerti has betrayed him and left him sobbing.

© Copyright tellybest.com, 2022, 2023. All Rights Reserved. Unauthorized use and/or duplication of any material from tellybest.com without written permission is strictly prohibited.
Cached Saved on: Wednesday 25th of January 2023 09:38:04 AMCached Disp on: Wednesday 1st of February 2023 10:21:13 PM