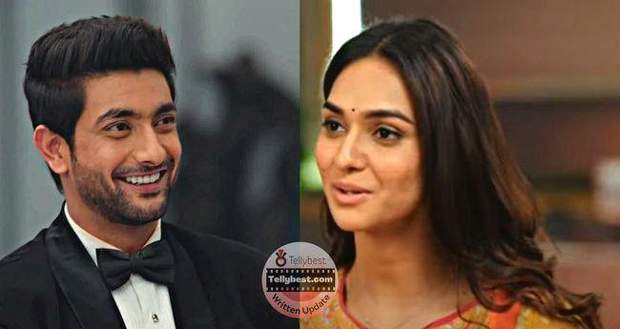 Today's Dharam Patni 13th December 2022 episode starts with Ravi telling Pratiksha that he will keep talking to her so that she can be distracted from the pain.

He starts talking and gets surprised to learn that they are getting engaged on the same day and at the same time.

Meanwhile, Adi meets up with Kirti and tells her that Ravi is waiting for her in the powder room.

Ravi accidentally hurts Pratiksha and tells her that he will get another ring while she manages to get the ring out and gives it to him.

Kirti comes near the powder round while Ravi comes there and takes her away saying that he found the ring while telling Adi to not meddle in his business.

Later, Ravi and Kirti's parents are joking about their future relations since they are business partners while Ravi and Kirti are romancing.

Dadi tells Kirti that she needs to rest and tells her to go home while Ravi offers to drop her off.

However, Kirti's father tells Ravi that he will drop her off since she is his daughter and takes her away.

Meanwhile, at the Parekh house, Pratiksha shows the ring to her sister and tells her that the shop had a ring with Ganesha but someone else had bought it.

Hansa tells the girls to stop their chit-chat and start working on the decorations.

At night, the sisters go to the terrace and look at the beautiful sky while Parul tells Pratiksha to look at the moon and then look at Malhar so that all his flaws get removed.

Pratiksha looks at the moon and then gets shocked as she looks down and sees Ravi coming out of his car.

Ravi talks to a man about the directions to the party he is going to while Parul and Kinjal see Pratiksha's eyes fixated on him.

The sisters ask Pratiksha about the guy and she accidentally reveals that his name is Ravi and that he is the one who had saved her from the goons.

Further, the sisters excitedly go to look at the guy while they get mesmerized by his handsomeness.

The sisters gush and tell Pratiksha that she is destined to marry Ravi since she saw him after making the wish.

However, Pratiksha tells them that he is already going to get engaged to someone else and goes downstairs.

Hansa sees Pratiksha and tells her to iron the clothes while Pratik comes there and tells them that he has finally booked the mansion that they wanted for the engagement.

The next day, the Parekh family is busy getting the mansion decorated while Pratik sees Pratiksha helping around and tells her sisters to take her so that she can get ready.

Hansa tries to get Pratiksha to help decorate while Pratik tells her that Malhar will help with decorations.

© Copyright tellybest.com, 2022, 2023. All Rights Reserved. Unauthorized use and/or duplication of any material from tellybest.com without written permission is strictly prohibited.
Cached Saved on: Wednesday 25th of January 2023 12:58:13 PMCached Disp on: Wednesday 1st of February 2023 08:39:34 PM