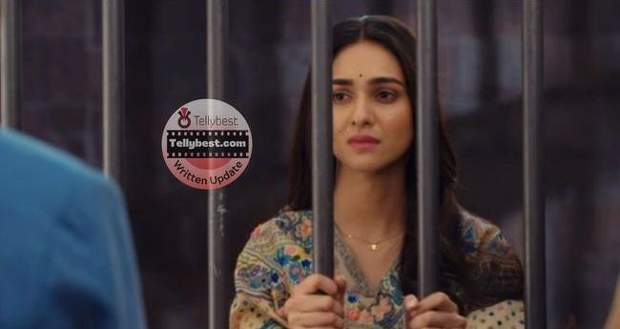 Today's Dharam Patni 13th January 2023 episode starts with Ravi recalling his moments with Keerti as she sits on the bed and forgets about himself.

The next morning, Ravi covers the curtains of the window and sits there rocking himself back and forth as he keeps thinking about his Dharampatni while the days turn into weeks with only the length of his beard being the sole indication.

Meanwhile, Pratiksha asks Malhar why she is still in jail and he responds to her that no lawyer is willing to take up the case due to Randhawa and Sachdev family's influence.

He assures her to not worry since he will soon get a hold of the CCTV footage.

Just then, a constable tells Malhar that they have gotten the CCTV footage and Pratiksha requests Malhar to see it thoroughly while Malhar thinks that he can't let himself be exposed as the real culprit in the case.

Back at the Randhawa family, his mother sits beside him and requests him to bring back the old Ravi while telling him about how her mother left her and how her father tries to give her all the love that he could.

Ravi suddenly thinks of Keerti's death and Pratiksha as he tells his mother that she is right and opens the curtains.

On the other hand, Malhar sees the video and gets glad as he thinks that he is not being shown in the video.

He thinks that both he and Pratiksha will be saved since Pratiksha is innocent and he is not in the video.

He goes to Raghu's house and arrests him while showing his power very egoistically.

Malhar also calls Pratiksha and informs her that he has found some evidence.

However, he gets a call from Thakur and he takes the jeep and Raghu to the den while telling the constables to go back to the police station.

At the police station, Thakur's men rebuke Malhar and Thakur shows him the video of the night of the accident that Raghu took.

Malhar begs to not show the video to anyone else, especially the police, while Thakur makes a deal with Malhar.

Thakur tells Malhar that he must work for him as an undercover and sends him away with threats.

Further, Malhar returns to the police station where the Inspector asks him about progress in Keerti's case.

The inspector imforms him about the hearing the next day and even tells him to not help Pratiksha since Keerti's father, Gulshan is the one fighting the case.