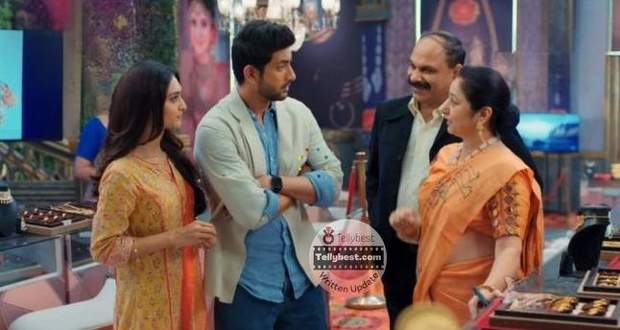 Today's Dharam Patni 14th December 2022 episode starts with Malhar trying to compliment Pratiksha while Parul and Kinjal make fun of him telling him that Pratiksha hasn't dressed up yet and that she is allergic to his sweetness.

Parul tells him to see movies and copy the dialogues from there as the compliments will be genuine at least then.

On the other hand, Ravi helps Kirti get out of the house by saying that her ring is a little small on her finger.

Ravi tries to flirt with Kirti and she also starts being all lovey-dovey with him but gets a call from the NGO and leaves.

Meanwhile, at Parekh's place, Malhar sees his friend and gets worried thinking that Pratiksha might recognize him as a goon while his friend reminds him that Pratiksha was kidnapped for real that time and did not even meet him.

Later, Kirti's parents get worried as the Mahurat is approaching and Kirti is still not home.

Kirti's mother requests her husband to call her while he goes to Ravi and tells him to call u Kirti.

Ravi calls Kirti and tells her where she is while she informs him that she is stuck in traffic and will be there soon.

Malhar and his friend talk about their boss Thakur while Malhar reveals to him that he saw Raghu at the place where Pratiksha was kidnapped.

Kirti sees Raghu from her rearview mirror and goes after him leaving her car in the middle of the road.

Raghu goes inside the mansion where Malhar and Pratiksha are getting engaged and Kirti goes inside trying to search for him.

She calls Nisha and asks her the name of the guy who kidnapped her and Nisha informs him that his name was Raghu.

On the other hand, Kirti's father gets a call from the lawyer who informs him that Kirti has filed a complaint against Raghu, a goon of Thakur.

He gets worried while Kirti's mother asks her what is happening.

Kirti's father informs her about Thakur and how he is known to get rid of people who go after him.

Raghu tells him that he saw him at the jeweler's shop and is there to give him a visit.

Malhar goes to get something to eat for him while Kirti's phone dies and she gets worried.

Parul and Kinjal get emotional as they see Pratiksha all dressed and ready for the engagement while saying that she looks just like their mother.

However, Pratiksha hugs her sisters and tells them that no one can be like their mother.

Hansa comes there just then and tells them that to not start their crying session as the makeup artist has already left and will charge them again they call her back to fix up their face.