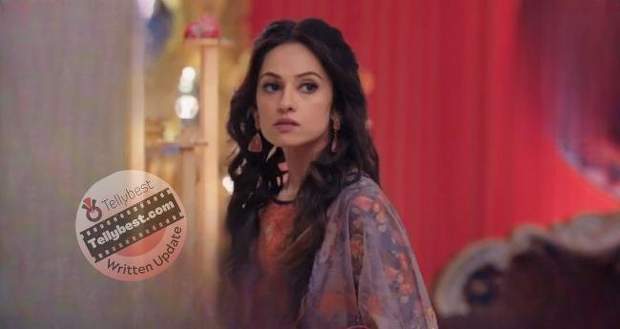 Today's Dharam Patni 15th December 2022 episode starts with Kinjal saying that Pratiksha's life would have been much more better if she had gotten married to the real hero.

Hansa asks who the real hero is.

On the other hand, Adi is teasing Ravi who is missing Kirti.

Further, Adi says that his ex also used to like him and fall for his smile while joking that his relationship was one-sided too.

Just as Ravi is about to leave, he bumps into Kavya who flirts with him and tells him that he has been going after a lot these days.

She tells Ravi that she is only joking and tells him that she will find someone much better than him while he tells her that he hopes she finds her best as he has got his best, which is Kirti.

Ravi leaves from there along with Adi while Ravi's sister comes there and jokes with Kavya that she and Ravi look good together.

Kavya accidentally reveals that she is in love with Ravi while Ravi's sister takes her away and tells her that it is what she wishes for too.

Kavya tells her that she already confessed to Ravi but he rejected her.

However, Ravi's sister keeps encouraging Kavya telling her that what is destined will happen.

Meanwhile, Raghu feels as if someone is following her and tries to find the person while Kirti hides and takes his pictures so that she can show them to the police.

On the other hand, Ravi keeps praising Kirti to Adi while telling him that he has to go and look for her since she is still not there at her own engagement.

At the same time, Raghu notices Kirti leaving and goes after her while Malhar and Pratiksha get ready for their engagement.

Hansa tells them to wait for Pratik while revealing that there will be dancers to do the Garba at the engagement.

While trying to escape, Kirti stubs her toe and falls down while Raghu catches up to her and hits her on the head with a vase making her fall unconscious.

Raghu hides the unconscious Kirti by wrapping her in a carpet and escapes while Pratik brings in the home minister and introduces him to the family.

Malhar tells his friend that he is getting married into a reputed family which is why he does not want to associate with Thakur anymore.

However, his friend reminds Malhar that they cannot close Malhar's chapter that easily.

At the same time, Raghu gets a call from Thakur and he informs him about getting a hold of Kirti.

Thakur tells Raghu to not end her there and bring her to their den first as her pretty face might bring in the loss that she caused them.

However, while Raghu is busy on the call, Kirti manages to get out of the carpet and tries to hit him.

Raghu manages to duck and fights with her while she knees him and escapes from there while Thakur hears everything on call.

On the other hand, Ravi gets worried as he keeps trying to call Kirti while revealing to Adi that he used his powers to find out if there was any traffic or any accident but there isn't which is worrying him even more.