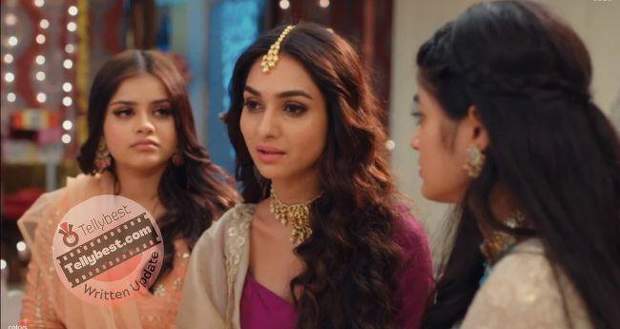 Today's Dharam Patni 16th December 2022 episode starts with Kirti escaping from Raghu and hiding in the powder room while he tries to look for her.

Meanwhile, Pratik tells Pratiksha to get her mother's dupatta from the powder room as she will look beautiful in that.

At the same time, Kirti wears the dupatta of Pratiksha's mother and hides but Raghu finds her and threatens her with a knife.

Just then, they hear a noise and Raghu manages to capture her while hiding with her behind the window.

Pratiksha comes there and tries to look for her dupatta when she sees some movement and shouts who is it?

Raghu whispers into Kirti's ears to not make a noise as he has been ordered to not kill her but he can kill Pratiksha.

Hansa comes there just then and tells Pratiksha to leave the dupatta as they are getting late.

Further, Pratiksha and Hansa leave while Raghu makes Kirti smell chloroform and leaves from there to make arrangements.

However, Kirti is just acting and calls Ravi while telling her that she is trapped somewhere.

Meanwhile, Malhar meets up with Raghu and asks him if he was the godown the night of the kidnapping while Raghu argues that he lost the right to ask questions the day he left their gang.

Just then, Kinjal comes there and tells Malhar that everyone is waiting for him inside.

Further, while the prayer is going on, Raghu enters the palace once again to take Kirti's body in it.

At the same time, Pratiksha and Malhar's engagement starts as Pratiksha slides the finger onto his ring finger.

However, when it is his turn, he reveals that the ring is with Hansa who sends Kinjal to get her purse since the ring is in the purse.

Meanwhile, Raghu sees Kirti missing once again while she tries to hit him with the lamp from behind.

Raghu fights with Kirti and pushes her to the ground while Kinjal comes there and gets shocked.

Raghu hits her too and makes her fall unconscious while the family keeps on waiting for her to bring the ring.

Just then, Ravi comes there with the police and tells them that her fiancee is kidnapped and kept there.

Hansa and Malhar argue with Ravi telling him to not ruin her function when the Home Minister comes there.

He tells the police officer that he knows these people and that the kidnapping has not been done here.

The police officer agrees and tries to leave while telling Ravi that the Home Minister is right and that they should not interrupt someone else's function.

© Copyright tellybest.com, 2022, 2023. All Rights Reserved. Unauthorized use and/or duplication of any material from tellybest.com without written permission is strictly prohibited.
Cached Saved on: Wednesday 25th of January 2023 09:58:53 AMCached Disp on: Wednesday 1st of February 2023 08:41:01 PM