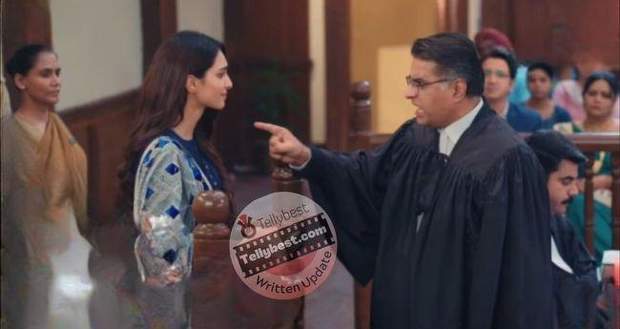 She cries telling Pratik that she is scared while Pratik convinces her that he is sure Malhar will save her since he is her fiancee and also the police officer involved in the case.

Just then, the lady constable brings Prateeksha out of the cell and she rudely says that it is time for the hearing.

Pratiksha asks Pratik if she will be declared innocent or not while Pratik tells her to not be worried since she has not done anything.

Further, in court, Gulshan brings Pratiksha into the confession box and questions her relationship with Keerti.

Pratiksha says that she was neither friends nor did she have a formal relationship with Keerti but she had met Keerti many times.

Gulshan argues that Prstiksha's earring was found even after she had no relation with Keerti.

However, Pratiksha's lawyer objects and shows a picture of Gulshan with a lady and assumes that they are having an affair.

Gulshan gets angry and asks how can he assume that while Pratiksha's lawyer argues that in the same way, how can they assume Pratiksha to be the killer with only her earring being found at the accident site.

Further, Malhar brings Pratiksha's jewelry to the court and gives it to the judge while Hansa recalls Malhar taking it from her with the excuse of using it to save Pratiksha.

Pratik asks Hansa how Malhar got the jewelry case since it will weaken Pratiksha's case while Hansa lies that she does not know.

Further, Malhar also says that he saw the CCTV footage and is reluctant to say it but lies that he saw Pratiksha driving the car.

In the end, the judge asks Pratiksha's lawyer if he has anything to say while Mr. Patel says that he has said everything he had to say.

In the end, the judge announces that the verdict will be given on Monday and adjourns the court.

Pratiksha hugs Pratik crying that she didn't do anything while Dolly comes there and bad-mouths Pratiksha.

However, Hansa argues with Dolly when Dolly leaves saying that she does not talk to people like her.

Further, the constables are standing outside with Pratiksha while Ravi comes there and stands in front of her.

The constable says that he needs permission to talk to Pratiksha but Gulshan comes there and tells them that he has got the permission.

Further, Gulshan tells Pratiksha that she is not only fighting a lawyer inside the court, but a father whose precious daughter she killed.

Pratiksha continues sobbing as she begs them to believe that she did not kill Kirti.

Gulshan leaves saying that he and Ravi will get justice after her verdict on Monday.

Gulshan leaves while Ravi questions Pratiksha why she did it.

Pratiksha tells him that she did not do it while Ravi tells her that she has committed two crimes with the other being her breaking his trust so much that he cannot trust anyone anymore.

Pratiksha cries as she feels helpless while Ravi taunts her saying that even her fiancee has left her side since no one wants to support killers.

Prateeksha cries knowing the truth and also knowing that Ravi will not believe her if she tells him that it was Malhar who was driving the car that night.

Further, the constable drags Pratiksha into the jeep while the Parekh family runs to talk to her.

However, the jeep leaves making the Parekh sisters sob in helplessness.

Meanwhile, Gulshan convinces his wife Meghana that Kirti's killer will get punishment.

Kavya sits with Ravi in the car telling him that they will get justice while Ravi states that he will not sit calmly until the culprit is jailed.

© Copyright tellybest.com, 2022, 2023. All Rights Reserved. Unauthorized use and/or duplication of any material from tellybest.com without written permission is strictly prohibited.
Cached Saved on: Wednesday 25th of January 2023 12:57:41 PMCached Disp on: Wednesday 1st of February 2023 07:11:53 PM