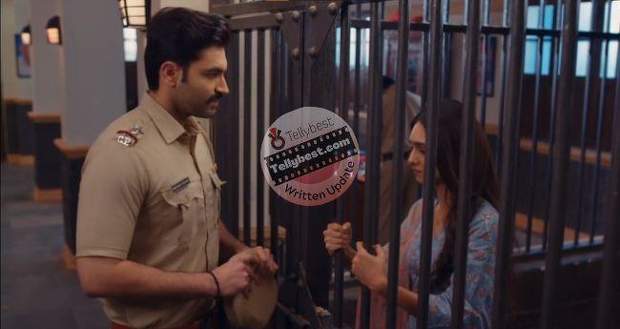 Today's Dharam Patni 17th January 2023 episode starts with Pratik questioning Malhar about what he did while Malhar tries to act like a wise person.

Hansa tries to support him and talks badly about the Parekh sisters while Pratik stops her and tells her to question her nephew first.

Malhar reasons that he has to investigate first while Pratik gets a call from someone.

While talking, Pratik thanks the person and tells them to do his other work too.

Malhar gets anxious and asks him who he was talking to while Pratik reveals that he has hired an investigator for the case.

He leaves telling Hansa and the family that he will find the real culprit soon.

Elsewhere, Kavya tries to get Ravi to talk casually while they get stuck because the bike of the person in front of him doesn't start.

Ravi keeps on blowing the horn and irritates the man who comes to the window of the car and scolds Ravi for showing off.

However, a shift happens in Ravi's eyes as he gets out of the car and starts slapping the man ruthlessly.

Kavya apologizes to the man and drags Ravi inside the car while telling him to calm down.

Ravi cries as he says that he has lost control while Kavya tells him to think about his moments with Kirti.

However, Ravi dries his tears as he says that he won't think about Keerti until he brings justice and punishes the person who killed her.

Back at the Parekh house, Hansa continues blaming Pratiksha and calling her a killer while she hits the nerves by saying that she is glad Pratiksha's parents died earlier as they would have died again seeing what she has done.

Hansa further mocks Parul and Kinjal while Malhar comes and stands by the door as he hears Pratik arguing with Hansa.

Pratik tells Hansa that he will use all his connections to save Pratiksha the same way he got Malhar the job at the police station.

Just then, Malhar comes inside and acts all nice in front of the Parekh family.

However, Pratik sees right through his drama and rebukes Malhar while asking him why he let Pratiksha drive the car when he knew how to drive the car himself.

Malhar stays silent as he thinks that he will be dead if Pratiksha reveals to Pratik that he was hiding in the back seat of the car.

Pratik says that he will see the CCTV footage himself and find the truth while he goes to talk to someone on the call.

Meanwhile, at the Randhawa house, Ravi talks about some deal on call with his father who tells him to come out of Keerti's memories the same way.

Elsewhere, Parul and Kinjal are buying vegetables in the market while the ladies gossip about them being sisters of a murderer.

Kavya comes there in her car and swerves the car in a way that makes the mud splash on Kinjal and Parul.

Kinjal and Parul make Kavya stop the car and scold her for not driving the car properly while Kavya throws water on them.

Kavya continues insulting and humiliating Kinjal and Parul while accusing Pariksha of being a cold-blooded murderer who killed her sister.

Parul speaks up for her sister and states that God will support the truth and she is sure her sister will be proven guilty.

He tells Kavya that she should not be proud of her money and wealth as it cannot save her in times of need.

Kavya leaves angrily while the guy sends the crowd away as Kinjal and Parul thank him and leave.

Back at the Randhawa house, Ravi's mother tells his father that she is worried about him and cries to him.

He tries to console her while he sees Biji entering their room with tears her in eyes.

He rushes to Biji and asks her if she needs anything while she states that she wants the peace of the house back.

Elsewhere, Ravi imagines Keerti greeting him as he enters his room and talking about their first date together.

She asks him for the charger and Ravi rushes to get it for her while the image disappears again breaking his heart.

© Copyright tellybest.com, 2022, 2023. All Rights Reserved. Unauthorized use and/or duplication of any material from tellybest.com without written permission is strictly prohibited.
Cached Saved on: Wednesday 25th of January 2023 09:23:06 AMCached Disp on: Thursday 9th of February 2023 06:05:00 AM