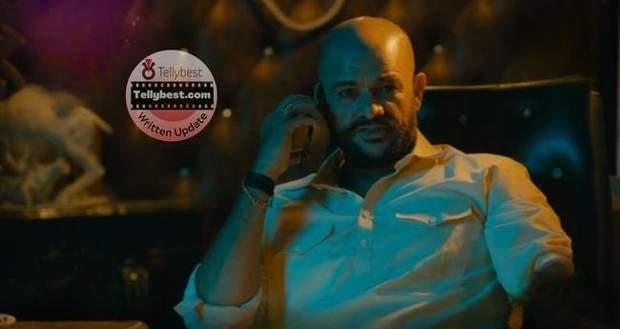 Today's Dharam Patni 19th December 2022 episode starts with Ravi requesting the police to search the place and find Kirti as he is sure she is there only.

Meanwhile, the tempo driver enters the house to find Raghu and gets shocked to see the police there.

He goes back out and calls Raghu informing him that he is leaving from there as there are police inside the mansion.

Raghu gets annoyed as he tells the driver to leave the tempo there and go as he will handle everything.

Raghu calls Monty and tells him to reach the mansion immediately while Thakur calls him and scolds him for ignoring his calls.

Thakur gets informed about the situation at the palace and tells Raghu to save himself on his own.

Meanwhile, Ravi argues with the police and runs inside to look for Kirti while the Home Minister orders the police to stop him.

However, Pratiksha tells the police to let Ravi search for his bride as he is also getting engaged to Kirti today.

Ravi rushes to look for Kirti while Pratiksha's Dupatta gets stuck in his watch and gets dragged after him.

The others also start looking for Kirti while Monty enters the mansion through the window into the room where Raghu is waiting for him.

Later, Ravi and Pratiksha enter the makeup room and look for Kirti while Ravi notices Kirti's dupatta behind the cupboard and tries to move it on his own.

Pratiksha calls the police to help move the cupboard while Ravi angrily blames Malhar and says that he thinks Malhar is the one who got Kirti kidnapped.

As the Parekh family argues with Ravi, Malhar thinks that Raghu must have kidnapped Kirti.

Meanwhile, the police bring out the unconscious lady who turns out to be Kinjal, not Kirti.

Elsewhere, Raghu and Monty are driving the tempo while talking about how they escaped with Kirti and hid the other girl behind the cupboard.

Raghu calls Thakur and tells him that he is just reaching the mountain area with the girl while Thakur tells him to take the other turn from ahead which leads to the cliff.

Thakur tells Raghu that he has found out about Kirti and they cannot do her deal.

He tells her that their only option is to kill her.

However, Raghu gets hesitant when Thakur tells him to take the girl to the cliff as he will do the job of killing himself.

Back at the mansion, Ravi sees the marks on the window and figures out that the kidnapper took away Kirti and hid Kinjal since she might have seen him.

Kinjal wakes up and hugs Pratiksha while she informs everyone that Kirti and the kidnapper were fighting and that she was knocked unconscious by the kidnapper.

At the same time, Kirti regains consciousness and covers the window overlooking the front seat with cardboard boxes while opening the shutter to jump.

She thinks that she will definitely die if she jumps and does not know how she will end up if she stays there.

Back at the mansion, the Home Minister tells the person who knows the kidnapper or is involved in the kidnapping to come forward.

When no one comes forward, Hansa tells the family that they should continue with Malhar and Pratiksha's engagement.

© Copyright tellybest.com, 2022, 2023. All Rights Reserved. Unauthorized use and/or duplication of any material from tellybest.com without written permission is strictly prohibited.
Cached Saved on: Thursday 26th of January 2023 06:47:28 PMCached Disp on: Sunday 5th of February 2023 02:56:31 AM