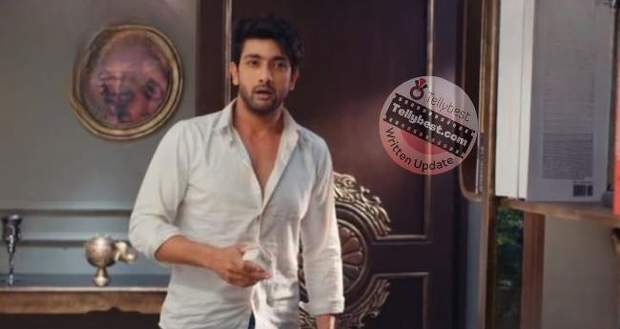 Today's Dharam Patni 19th January 2023 episode starts with Ravi's mother crying to her husband and Biji about not being able to see Ravi in such a state.

She cries as she states that she cannot see her child this way and asks what should they do to bring back his lively child.

Meanwhile, at Thakur's den, Malhar gets shocked to see Thakur holding a gun aimed at him while he says that love is a very cheap thing.

He sits in front of Malhar and tells him that one accident put him in this situation and the other will bring him safety.

Malhar questions whose accident and Thakur tells him to kill Pratik.

On the other hand, at the Parekh house, Pratik is comforting Parul while Hansa taunts Kinjal to work safely to make the Halwa, or else they might end up in jail too.

Pratik tells Hansa to not speak that way while Hansa retorts that Gulshan is very powerful and might put them in jail too.

Parul talks for her sister while Hansa tells her to not show off her Goddess speech in front of her and should talk to her sister before she ends up being hanged for her crime.

Pratik leaves angrily while Hansa taunts the Parekh sisters to continue their work while stating that she has said nothing wrong.

At the Randhawa house, Ravi sits by the window as he looks at the moon and continues thinking of his moments with Keerti.

Jugni prays to the goddess to not put their children through such pain and show them the right pack.

At the same time, Kavya sits with her friend Aishwarya who tells her that she needs to help Ravi get better as he might not share things with his parents.

Aishwarya tells Kavya that she is sure Pratiksha should be jailed while Kavya says that Pratiksha needs a much more cruel punishment than just a hanging sentence.

At the same time, Gulshan is overhearing their conversation and gets influenced by Kavya's words.

Further, Gulshan goes to his room and calls a police officer who is a slew even though he is on duty.

The officer finally picks up his phone and apologies while Gulshan tells him to remember the favor that he owes him.

The police officer says that he will owe him till he dies and Gulshan tells him that it is time.

Gulshan talks to the police officer about the goon lady in his station named Vimla and tells him to transfer Vimla to Pratiksha's cell.

Meanwhile, Gulshan's wife overhears their conversation and tells him that these things won't bring their daughter back while Gulshan angrily tells him to not interfere between him and his revenge.

Back at the police station, Pratik talks to Pratiksha and tells him that he will find a way to prove her innocent once he sees the CCTV footage that the commissioner will give her.

Further, as he is exiting the police station, Vimla is being taken inside as she puts her hand in between his and makes him fall.

The lady constable asks her why she did it while Vimla just shrugs her shoulders.

At the Randhawa house, Ravi gets ready as he states that he will take Keerti for a long drive and will have ice cream with her later while struggling for words.

Just then, Kavya hugs him and Ravi hugs her back asking her why she came as he was coming to her anyways.

Ravi tells her that she should know he loves her while Kavya hears it and sobs as she knows that these words are for her dead sister.

© Copyright tellybest.com, 2022, 2023. All Rights Reserved. Unauthorized use and/or duplication of any material from tellybest.com without written permission is strictly prohibited.
Cached Saved on: Wednesday 25th of January 2023 12:37:46 PMCached Disp on: Tuesday 31st of January 2023 08:07:24 PM