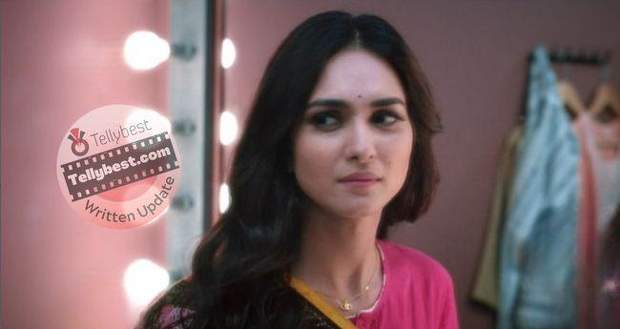 Seeing him, Hansa disconnects the call and starts diverting the topic while Pratik tells her that he wants to take all three sisters with them to Chandigarh.

Hansa thinks about her plan and immediately agrees which shocks Pratik.

However, Hansa says that even she becomes nice in times of need.

The next day, Pratik tells the sisters to pack their bags as Chachu-Chachi has decided to bring the siblings with them to Chandigarh.

Parul gets excited while Hansa shows them the tickets and tells them to collect all the things.

They all pack their bags while Pratiksha takes pictures of her parents and gets in the car.

While they all board the train to Chandigarh, Hansa talks to Malhar on call and tells him her plan to make Pratiksha lose her way in Chandigarh.

Once they reach the railway station at Chandigarh, Hansa tells Pratiksha to come in a rickshaw as there isn't much space and tells the driver to start the taxi.

Afterward, Pratik sees Pratiksha missing and asks Hansa about it who lies to him that Pratiksha is coming in another rickshaw after she gave her the address.

Later, Pratiksha tells the rickshaw driver to drop her at Pratik Parekh's house but the driver says that he doesn't know Pratik.

However, three people in tempo come there asking for directions towards Duggal Industry as they eye Pratiksha.

When Pratiksha is talking to the rickshaw driver, the goon covers her face and drags her to the back of the tempo, throwing her inside the backside and covering the shutters.

Others try to save Pratiksha but the goons beat them up and leave hastily.

Pratiksha cries feeling helpless when another girl flashes the flashlight at her and makes her realize that there are many girls in the tempo.

Further, the girl calls someone named Kirti and tells the girls that Kirti is from an NGO and will save them.

Later, the girls are taken to an abandoned industry while a girl (Kirti) follows them in her car, keeping a relative distance.

The goons tie the girls to the entrance hallway and leave.

However, Kirti comes there just then and unties Pratiksha, and tells her to leave.

Pratiksha tells Kirti that she will help her and starts untying other girls.

Kirti says that she is impressed with Pratiksha and they take all the girls, leaving the abandoned industry swiftly.

However, Pratiksha accidentally knocks over some boxes which alerts the goons, making them rush there.

Most of the girls manage to escape except for Pratiksha and Kirti.

Kirti pulls out a gun from her bag and threatens the goons to let them leave.

However, the goons hold Pratiksha while Kirti manages to hide from there.

Elsewhere, the Industry tycoon, Ravi Randhawa, gets a video call from Kirti in the middle of a meeting.

As he picks up the call, Kirti tells him to come to the abandoned industry space and save her, or else she will not talk to him her whole life.

© Copyright tellybest.com, 2022, 2023. All Rights Reserved. Unauthorized use and/or duplication of any material from tellybest.com without written permission is strictly prohibited.
Cached Saved on: Wednesday 25th of January 2023 06:44:11 PMCached Disp on: Monday 6th of February 2023 05:41:04 AM