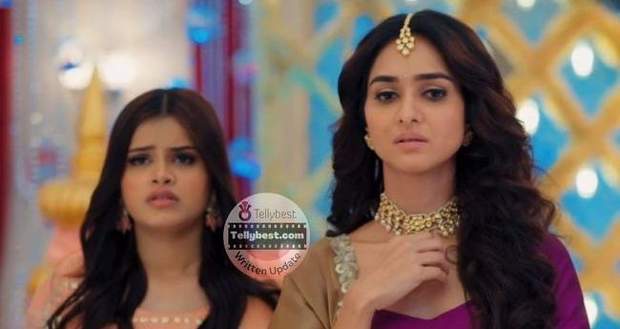 Hansa asks him why he's leaving while Panditji tells her that the Mahurat for the engagement has already passed.

On the other hand, the other Panditji is also telling Ravi and Kirti's parents that they should not do the engagement since the Mahurat has passed.

Kirti's father says that he does not care about the Mahurat passing but the bride and the groom need to be there for the engagement who are not available.

Meanwhile, the passerby stops the tempo to pass by while Kirti manages to jump without much damage and remembers the license plate number of the tempo.

Some ladies see Kirti and rush to help her while Radhu does not notice Kirti because of her being surrounded by the ladies and drives away.

Kirti calls Ravi and cries as she tells him that he will never leave her and requests he gets married to her.

Ravi laughs saying that he will never leave he while she tells him that she does not want to worry the housemates and will reach home from the back door.

Later, the couple enters the house through the backdoor, and Kirti worriedly starts looking for her outfit while Ravi calms her and helps her find it.

She looks back at him with adoration in her eyes and hugs him once again after which he helps her in getting dressed up.

Ravi romances Kirti as he hugs her from behind and also gives her a forehead kiss to calm her erratic heart.

Back at Parekh's place, Hansa requests Panditji to continue with the engagement as it will become too much expensive if they do the decorations again and many VIP guests will also not come the second time.

Meanwhile, at the Randhawa mansion, Ravi and Kirti arrive in the hall and tell Panditji to do their engagement hurriedly.

Panditji informs the couple that the Mahurat has passed but the family elders tell Panditji to do the engagement as they do not believe in Mahurat and other things.

The engagement starts as Kavya looks at Ravi and Kirti getting engaged with the whole family's blessings.

Ravi thinks that he believes in Mahurat and blames Malhar for him getting late to find Kirti and the engagement getting delayed.

While the Panditji ties the holy thread in their hands, both Ravi and Pratiksha recall the moment when Pratiksha's dupatta got stuck to Ravi's watch.

On the other hand, Thakur gets angry at Raghu when he sees that the girl is not in the tempo and threatens to throw him off the cliff while Raghu promises to not make this mistake again.

Ravi gets engaged to Kirti and gives her a soft forehead kiss in front of the whole family while Kavya feels her heart getting stabbed by needles as she tells Amaira that her hopes are shattered and now she will have to live with those shattered hopes.

At the same time, Malhar and Pratiksha also get engaged while Malhar hugs Hansa and congratulates her for getting the jewelry that she wants.

Hansa tells him to not speak too loudly and smiles as she greets other guests and family members.

Back at the Randhawa mansion, Adi jokes that Ravi will do anything that Kirti wants while Kirti coughs.

Ravi rushes to get water for her and the whole family laugh saying that he has become 'Joru Ka Gulaam'.

© Copyright tellybest.com, 2022, 2023. All Rights Reserved. Unauthorized use and/or duplication of any material from tellybest.com without written permission is strictly prohibited.
Cached Saved on: Wednesday 25th of January 2023 06:24:53 PMCached Disp on: Monday 6th of February 2023 04:52:24 AM