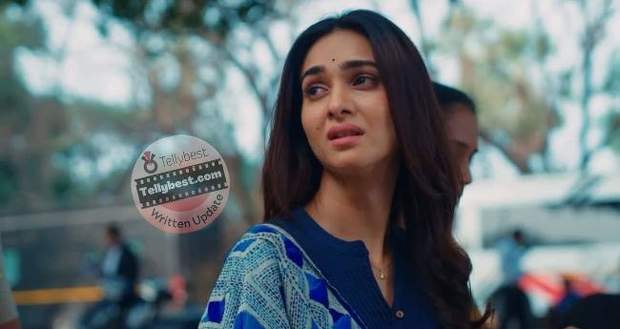 Today's Dharam Patni 20th January 2023 episode starts with Ravi moving away from Kavya and asking her where is Kirti.

However, Kavya pleads with Ravi to come back to reality and tells him that it was she he had hugged not Keerti.

Kavya tells Ravi to look her in the eyes and say that he does not care about his family.

Back at the Parekh house, Kinjal is cleaning the house when she accidentally breaks the glass on Pratik's frame.

Hansa comes there and scolds her for breaking it while telling her that it is very inauspicious.

Hansa rebukes the Parekh sisters while saying that her husband might die while running after saving Pratiksha.

Further, Hansa calls Pratik while telling Kinjal that she is continuously trying to convince him to not interfere in the drama.

Pratik finally attends the call and Hansa thanks God while telling Pratik to return home soon.

Kinjal also thanks God while Hansa tells her to continue working.

Meanwhile, at the police station, Pratiksha is about to drink water when Vimla comes there and snatches the glass of water from her.

She starts boasting about her heinous crimes to Pratiksha and tells her how she killed her own father cause he wouldn't let her smoke cigarettes.

Pratiksha tries to get away from her while Vimla drags her back by her hair and keeps on twisting it.

Just then, lady constable Bina comes there and tells Vimla to go and eat outside as the prisoners are allowed to eat out once a month.

Vimla leaves threatening Pratiksha that she is coming back after eating while the lady constable advice Pratiksha to speak up against Vimla or else she will have to live under her thumb.

Pratiksha talks back to Vimla!

Meanwhile, the ladies hear that Vimla is coming and hide while Vimla starts tasting all the food with her own bare hands.

The ladies get scared by her while stating that it is Vimla's rule to not eat with her or before her.

However, Pratiksha comes there just then while Vimla asks her if she knows her rule to not eat when she is there.

Pratiksha confidently replies that everyone is allowed to eat and states that eating together makes the food tastier.

As Pratiksha takes the food from her plate, Vimla throws the plate away and raises her hand at Pratiksha.

Pratiksha defends herself against Vimla!

However, Pratiksha stops her hand mid-air while telling Vimla that she is not a lion but a snake who killed her own father.

Vimla gets furious when Pratiksha tells her that not everyone inside the jail is a criminal like her and tells her to respect the food as she picks up the discarded food on the floor and cleans it while putting it back on her plate.

On the other hand, a van follows Pratik while he stops at a roadside temple and prays for his daughter Pratiksha to be proven innocent.

Meanwhile, Raghu watches over him through the van while the flashback shows Malhar stating that he won't be able to kill Pratik but won't stop them either.

Thakur tells him to go as he thinks that even if he didn't agree, he didn't refuse either.

Back in the present, Raghu hits Pratik who is just about to start his two-wheeler, and leaves while seeing Pratik withering and annoyingly thinking that he is still alive.

Back at the jail, Pratiksha thinks that she talked back to Vimla but she has no support inside the jail to stand against Vimla.

Just then, two other ladies Phula and Champa come there and praise Prateeksha for being able to stand up to Vimla.

They further ask her if she can teach them and Pratiksha glads accepts as she thinks that it will be an honor to teach them.

Meanwhile, Vimla overhears them and thinks that Pratiksha will teach them while she is going to teach Pratiksha a special lesson.

Further, Pratiksha sits in her cell as she thinks back to her discussion with Keerti and says that she is going to live Keerti's dream for her.

At the same time, Ravi is driving his car while he also thinks about his moments with Keerti and says that they had dreams together but they ended up staying dreams only.