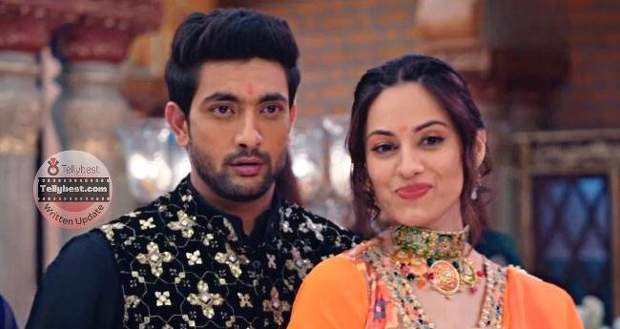 Today's Dharam Patni 22nd December 2022 episode starts with Thakur walking behind Keerti in the mall and is almost on the verge of attacking her from behind with a knife.

However, he misses the spot as Keerti walks ahead to see Ravi.

Meanwhile, Ravi is searching for Keerti too with a Punjabi lehenga draped over his arm.

He knocks on the door of the trial room, Pratiksha is in, thinking that it is Keerti inside.

Suddenly, Ravi breaks into a smile as he remembers how Keerti loudly talked about their honeymoon which earned them small giggles from the people around.

After dropping the dress over the trial room, Ravi leans against the door and starts talking while Pratiksha thinks that Malhar wants to see her as a Punjabi bride, which is why he chose this lehenga style.

Pratiksha's eyeballs almost pop out when Ravi starts talking about his honeymoon plans. She smiles as Ravi says he wants to hold her hand, go on long drives, and give her forehead kisses during their honeymoon.

Internally, Pratiksha thinks that his soon-to-be bride is very lucky since he is harboring all these intimate dreams so sacredly.

As soon as Ravi says that he maybe can come in to do some desi romance like tucking her blouse button, Pratiksha comes out, shocking Ravi.

Ravi gets scared and asks Pratiksha, couldn't she tell him by saying "Please wait (pratiksha Karo) for your Keerti".

Just then, Pratiksha feels an itch on her back and starts adjusting the back end of her blouse as Ravi offers to help him.

This time, Pratiksha gets shocked making Ravi say that he doesn't like making girls awkward.

Before leaving, Ravi tells Pratiksha not to steal his honeymoon plans and do it with her boy since he has a copyright claim over them.

After Ravi leaves, Malhar comes and tells her that he will wait for her at the billing counter while Pratiksha questions herself inside the trial room, as to why she feels something so strange all of a sudden.

On the other hand, Ravi and Keerthi finally meet in her trial room and Keerti asks him to tie the dori of her blouse.

As Ravi complies, he remembers how Pratiksha was unable to do it and questions himself as to why he is thinking about her like this.

Later, one of Thakur's men informs him that Keerthi is in a changing room but it turns out to be Pratiksha who tells them that the men changing room is on the other side.

From there, Ravi and Keerti also pass by and Thakur's man informs him that Ravi is her fiance, who always saves the day for her.

The next day, Hansa romantically flirts with Pratik, telling him that the Mehndi venue for Pratiksha is out of the world.

She then comments that who would have thought that from Junagadh, Pratiksha will land in Chandigarh.

Meanwhile, Thakur plans to kill Keerti since their godown in sector 55 of Chandigarh gets raided.

Kavya gets jealous to see Ravi care so much for Keerthi and says she cannot even find a photocopy of Ravi.

Neeti & Sanju (from the Parineeti serial) come to meet their long-time friend, Ravi, as both the couples banter about who loves their spouse more.

While Neeti & Sanju prepares to leave, Neeti bumps into her friend Pratiksha too, and gets sad when she comes to know that Pratiksha's parents have died.

However, Neeti urges Sanju to be there for Pratiksha's Mehndi to dance, and they both dance greatly to the Nagada Sang Dhol song.

Ravi is just passing by the lower floor when he bumps into Pratiksha and gets bewitched by her.

The 'M' from Pratiksha's Mehendi for Malhar gets rubbed off by Ravi's sherwani as he holds her.

Meanwhile, Thakur prepares himself to kill Keerti who is in her makeup room but Neeti comes there and he loses a chance.

Neeti informs Keerti that she will leave with Sanju now while Thakur hides in a nearby room.

Neeti's dress gets stuck in one of the nails of the wall and she closes the door of the nearby door, so nobody gets hurt, indirectly locking Thakur up.

© Copyright tellybest.com, 2022, 2023. All Rights Reserved. Unauthorized use and/or duplication of any material from tellybest.com without written permission is strictly prohibited.
Cached Saved on: Wednesday 25th of January 2023 09:10:20 AMCached Disp on: Monday 6th of February 2023 04:44:25 AM