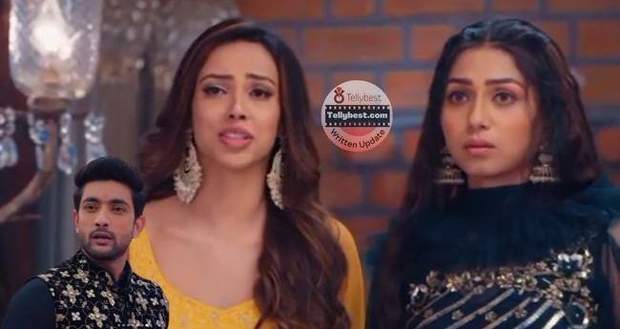 Today's Dharam Patni 23rd December 2022 episode starts with Jugni entering the Randhawa house while the people gossip about how she is blessed by the goddess herself and has superpowers.

Jugni goes to Ravi and he asks her if she's lost.

Jugni says that something will happen the next day that should not happen and tells him that she will come into his life in a way that will shock life itself.

The flashback ends as Ravi appears on the stairs overlooking all the guests with a faraway look in his eyes.

Meanwhile, Kirti comes out of the room and gets shocked as she bumps into Pratiksha.

Their hands collide as they both talk and find out about their functions being at the same place.

Kirti asks to see her mehendi while Pratiksha shows her hand and gets shocked as she sees 'R' instead of 'M'.

They laugh as Pratiksha says that it must have happened when they collided while Kirti shows her hand to show 'R'.

However, the 'R' on Kirti's hand is smeared as her mood also goes down.

They both go inside as they talk about each other's lives.

Pratiksha reveals that she is working part-time tuition and is also volunteering at an NGO.

Kirti reveals that it is her dream and laughs as she says that someone's dream is someone's destiny.

Kirti gets upset as she sees that the mehendi's color is not dark as Pratiksha's.

However, Pratiksha comforts Kirti as she tells her that Ravi loves her immensely.

Kirti gets surprised while Pratiksha tells her how Ravi was frantic when she was missing.

On the other hand, Thakur calls Raghu and shouts at him telling him that some girl locked her in a storeroom.

Pratiksha tries to comfort Kirti who is worried as she thinks that strangers who bump into each other have past connections and either take something or give something.

Later, Pratiksha leaves while Kirti realizes that Pratiksha's earring got stuck in her dupatta and goes to give it back to her.

On the other hand, Ravi and Pratiksha bump into each other again as they bicker with each other and go their own ways.

However, Jugni looks over them as she says that no matter how they want to separate, destiny will bring them together.

Afterward, Ravi and his siblings dance in the Mehendi ceremony while Ravi takes Kirti's hand and dances to a romantic song with her.

However, Kavya gets jealous and drowns herself in alcohol as she steps in between Kirti and Ravi.

Ravi is hesitant to dance with Kavya while Kirti tells him to dance as it will make her happy only.

Kavya starts dancing sensually with him while he tries to leave.

Kavya starts misbehaving with Ravi while Kirti notices his discomfort and thinks to do something.

© Copyright tellybest.com, 2022, 2023. All Rights Reserved. Unauthorized use and/or duplication of any material from tellybest.com without written permission is strictly prohibited.
Cached Saved on: Wednesday 25th of January 2023 05:32:02 PMCached Disp on: Wednesday 1st of February 2023 06:52:50 PM