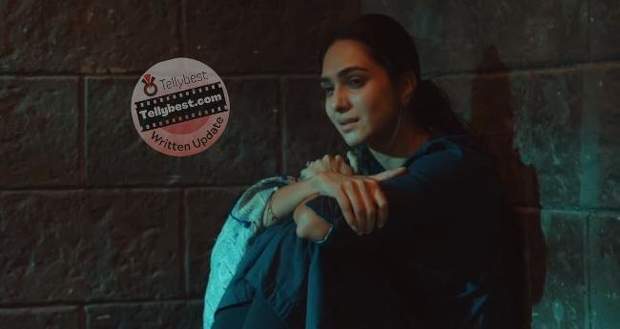 Today's Dharam Patni 23rd January 2023 episode starts with Ravi thinking about his Keerti and stating that he can never forget her.

Meanwhile, in the jail, Pratiksha thinks that she will live and complete all of Kirti's dreams even if Ravi thinks of her as the killer.

Ravi thinks that he will make sure Prateeksha gets jailed and pays for her punishment.

Pratiksha says that she saw love in Ravi's eyes for Keerti while Ravi thinks that there is only hatred in his eyes and his heart for Pratiksha.

Pratiksha wishes for Ravi's life to get better while recalling all the love he had in her life.

At the same time, Ravi cries as he says that he won't let even a single moment be peaceful in Pratiksha's life and will make her suffer just as he is suffering.

Just then, Keerti tells Ravi from the passenger seat that her Ravi was not like this.

She gets emotional as she states that Ravi never said or thought wrong for anyone while Ravi replies that her Ravi is dead.

Keerti cries as she tells Ravi that he should let the law give punishment to Pratiksha.

She states that even if Pratiksha killed her, it is wrong for him to think badly of her.

While Ravi tries to answer, he turns towards the passenger seat and sees that his Keerti has disappeared again which came as a spirit, or Ravi's imagination.

Elsewhere, Raghu sees Pratik trying to get a hold of his phone while he gets a call from Thakur.

Thakur asks about the mission while Raghu reveals that he is going to end Pratik soon.

As Raghu starts driving towards Pratik, he gets stopped as he sees two men rushing to help Pratik.

Meanwhile, at the jail, Phula and Champa get Pratiksha out of her cell and request she attends the RJ night with them.

Pratiksha agrees and goes with them while the warden accompanies them.

Raghu calls Malhar and informs him about Pratik not dying while he gives him the task to find Pratik in the hospital and kill him.

Malhar gets worried about where to find Pratik so he decides to call Hansa.

Hansa accepts the call and tells him to come home soon as possible since she has made Pav bhaji.

Malhar asks about Pratik while Hansa tells him that Pratik is still not home yet.

Meanwhile, Pratiksha tells the ladies not to thank her before she teaches them while she talks to Kirti's spirit/hallucination and states that she is fulfilling her dreams.

They all sit in the hall of the police station while they vote for Pratiksha to talk first.

Pratiksha talks to the RJ about education while Ravi, who is hearing the radio while driving, gets happy thinking that this topic is Kirti's favorite.

Ravi gets emotional as Pratiksha continues to talk like Keerti and wonders whose thoughts match Keerti's so much.

The lady constable and others clap for Pratiksha while the RJ asks her where she got this from.

Pratiksha smiles as she thinks about her moment with Keerti and states that this was someone else's dream that she is fulfilling.

As the call ends, Ravi thinks to find out who the speaker is and in which jail she is located.

Meanwhile, the lady constable Nisha hugs Pratiksha while hoping for her to get justice.