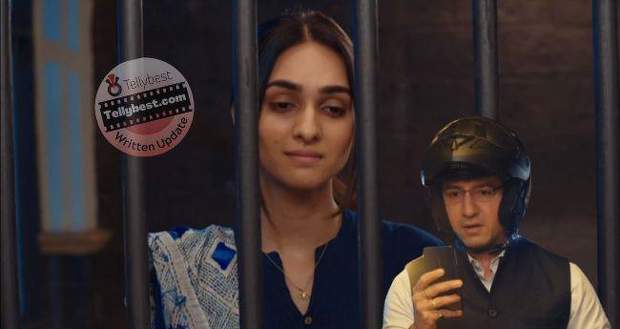 Kinjal and Parul try to console her but Hansa keeps crying, looking at Pratik through the hospital window into his ward.

Hansa mumbles sadly that she was just preparing Pav Bhaji at home for him and now, he is here.

Hansa's eyes shed tears, looking at Pratik who is her true love.

Catching a hold of the doctor who is treating Pratik, Hansa says that doctors are replicas of God and she wants him to save her husband.

The doctor informs Hansa that Pratik has lost a lot of blood and further surgery preparations for him are happening, so she needs to sign some papers.

Just then, Malhar also comes to the hospital and gets greeted by a crying Hansa who beats his chest, asking him to save Pratik.

Malhar pretends to be unaware of the fact that somebody hit Pratik on the road and left him there to bleed as he is the culprit.

Hansa says that whoever did bad to Pratik will become a beggar on the street and lose his job which concerns Malhar.

Meanwhile, the police inspector of the jail where Pratiksha is locked gets a call from Gulshan.

Gulshan sounds angry as he orders the inspector to not just keep Pratiksha locked up, but also torture her as she is the reason why Keerti is not alive in this world.

The inspector then calls the lady constable and asks her who freed Pratiksha yesterday for the RJ night.

Nidhi's name gets taken as the inspector whom Gulshan has bribed asks the lady constable to let Vimla torture Pratiksha as there's a lot of pressure from Gulshan.

Meanwhile, Malhar asks Kinjal, Hansa, & Parul to take some rest as he will keep an eye on Pratik.

On the other hand, Mandeep gets a call from Manvi who says that Gulshan is going too much.

Mandeep states that whatever Gulshan is doing is absolutely right while Manvi opinionates that torturing Pratiksha is no solution since the case is already in favor of them.

Mandeep then gets a call from Ravi and she scolds him about where he is.

Ravi doesn't bother with Mandeep's scolding and reveals that he heard a girl from jail talk exactly like Keerti used to do and he felt as if momentarily, Keerti was alive.

Meanwhile, Thakur calls Malhar and asks him when he will finish Pratik.

Malhar is uneasy to do murder but accepts Thakur's orders.

At the jail, Vimla fills Pratiksha's cell with cold water, making her ask for help.

The lady constable opens the cell after a long haul while Pratiksha asks the bribed inspector to either keep Vimla separate from her cell or let her talk to her Uncle.

At the hospital, Malhar catches two male nurses trying to steal something and then asks them to remove the wheels from Pratik's hospital bed so he doesn't have to directly kill him.

Internally, Malhar mocks Thakur and Raghu that he is more of a goon than them.

When Pratik comes awakes, he asks the male nurses to call someone from his family.

Since Malhar is the only one present, he goes to meet Pratik who is in deep pain.

However, Pratik asks Malhar forcefully when he is thinking of getting Pratiksha out of jail for the crime she didn't even commit.

Since Pratiksha will be hanged within two days, Pratik threatens Malhar that if he can get him a police job, he can also snatch it and put him behind bars and prevent Pratiksha to suffer for his bad sins.

© Copyright tellybest.com, 2022, 2023. All Rights Reserved. Unauthorized use and/or duplication of any material from tellybest.com without written permission is strictly prohibited.
Cached Saved on: Wednesday 25th of January 2023 09:13:57 AMCached Disp on: Monday 6th of February 2023 01:22:09 AM