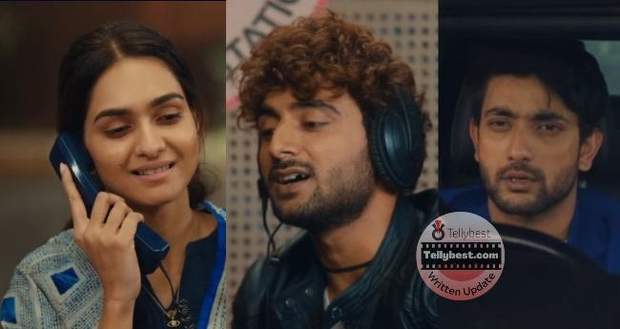 Malhar gets surprised to see Rasik's sharp tongue who states that he will not let his daughter (Pratiksha) suffer for a crime she didn't even commit.

Unable to take any chances on his job or life, Malhar tells Rasik that he killed Keerti in an inebriated state, and now, he will also kill him.

Grabbing a pillow, Malhar suffocates Rasik who slowly loses his breath away.

His feet struggle as Malhar suffocates him to death but after a while, he stops trembling and dies.

Malhar calls Thakur to inform him that he has killed Rasik when suddenly, Malhar starts shouting that Chacha Ji is dead.

He is dreaming and Kinjal comes to shake him awake.

Meanwhile, Ravi's parents, Mandeep & Amardeep discuss how happy everyone is while Ravi is all sad.

Ravi comes to have breakfast and tells Mandeep that he is going to meet the girl he heard on the radio yesterday whose thoughts match exactly Keerti's.

Meanwhile, at the jail, Pratiksha gets ready to take her first class as a teacher amongst the other lady prisoners.

As soon as she begins, Vimla comes there and starts playing loud music.

Pratiksha tells Vimla that as a teacher it is her duty to teach others manners and Vimla needs them heavily.

Meanwhile, Ravi reaches the jail to meet the girl whose thoughts match Keerti's.

While Pratiksha is taking her class, she tells that art is a form through which one can master patience as well as skill.

A smile spreads over Ravi's face as he imagines his Keerti teaching there.

However, when he realizes that it is Pratiksha, he publicly announces that she is a cold-hearted murderer who is using Keerti's dream to her advantage to look well.

He tells Pratiksha that she doesn't deserve happiness in her life while Pratiksha says she can empathize with him for his loss, but that doesn't mean he bashes her.

Vimla makes fun that the teacher is inside the jail due to a murder.

One of the female prisoners stands up and tells Pratiksha that if she hasn't murdered anyone, she shouldn't be afraid.

Pratiksha gets inspired and announces that she will fight for herself now and not crumble before anyone's feet.

At the hospital, Hansa arrives to see Rasik who is awake now.

Hansa says that he almost gave her a heart attack and then praises Malhar for standing with Rasik all throughout his unconscious state.

However, Rasik says he is concerned about Pratiksha now and Malhar didn't do anything yet.

Hansa reminds her husband that they are fighting against Gulshan Sachadeva but Rasik doesn't care and states that he never liked Malhar for Pratiksha.

Malhar leaves the wardroom while Hansa complains that Rasik ruined his mood.

Just then, Rasik gets a call from the person who has the CCTV footage of the day the accident happened.

Hansa says that Rasik got a call from his second wife but Rasik doesn't waste a second to get up on his feet and retrieve the evidence that can free Pratiksha.

Outside the jail, a strange-looking woman makes an ominous statement that whatever is happening is because of time.

Time can turn in anyone's favor.

Meanwhile, Mandeep goes to search for Keerti's old diary in Kavya's room to see if there's something inside it to cheer up Ravi.

She finds the diary inside Kavya's cupboard that has a lot of photos of Ravi.

However, behind one of the photos, there is a love note written by Kavya that ever since she knew Ravi, she realized the meaning of love.

Rasik reaches along with the lawyer at the jail and shows the inspector bail papers for Pratiksha.

The Inspector tries to be too smart but Pratiksha's lawyer shuts him up by saying he is older in age as well as in experience too.