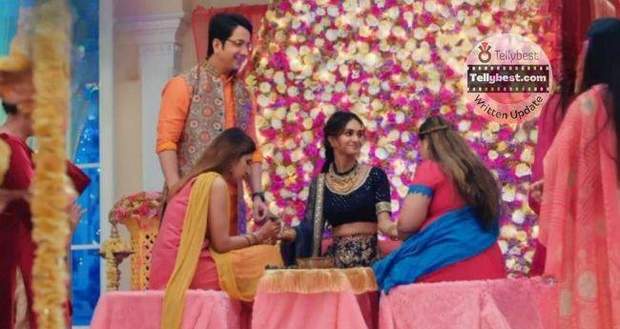 Today's Dharam Patni 26th December 2022 episode starts with Kirti looking at Ravi as everyone claps for Kavya and Ravi's performance.

Kavya goes to Kirti and tells her that she thinks they were made for each other while Kirti takes her away.

On the other hand, Hansa tells Kinjal to go look for Pratiksha while Parul is giving out drinks to the guests.

Amaira bumps into Parul and starts getting angry with her while telling her that she doesn't know how to do her job as a waitress.

Kinjal comes there and starts fighting for her sister.

Amaira calls her venue and choices cheap while Kinjal and Parul leave from there.

Meanwhile, Kirti learns that Kavya is drunk and tells her to drink black coffee.

However, Kavya tells her that she is drunk in love and finally reveals to her that she has been in love with Ravi since she was five years old.

Kirti tells her that she should have told her while Kavya reveals that she told Ravi the truth but he pushed her away cause his heart only calls out to Kirti.

Kavya starts getting frantic as she begs Kirti to give Ravi to her.

However, Kirti slaps her when Kavya says that she hopes fate takes Ravi away from her.

Kirti leaves telling Kavya to remember that this will be their last interaction if she talks anything about Ravi ever again.

On the other hand, Ravi is looking for Kirti while Kinjal and Parul tease Pratiksha about it.

However, Pratiksha tells her sisters that Ravi is not like that and tells them about Ravi and Keerti.

Pratiksha's sisters tease her while Hansa comes there and tells Pratiksha that it's time to dance.

Pratiksha and Ravi's eyes meet each other for longer than normal as Pratiksha hears Hansa calling out to her and leaves.

Further, everyone dances while Thakur gets a call from his lawyer telling him that the hearing for the case that Kirti filed against them is near.

Thakur hides the gun under the tray and walks towards Kirti after telling Raghu that keeping Kirti alive is risky for them.

However, Thakur sees the police guarding some VIP guests and goes back to Raghu telling him that they cannot kill Kirti here.

Ravi's Dadi jokes and makes everyone laugh while Kirti goes towards Ravi while Kavya looks on and burns in jealousy.

Ravi praises Kirti's dance and massages her legs while she looks at him adorably and thanks him for loving her.

Kirti tells Ravi that she liked him since childhood but that likeness turned into love as they grew up.

Kirti tells Ravi that she thinks God has made their bond which is why they are going to get bonded with marriage today.

Feeling emotional, Kirti tells Ravi that she is feeling uneasy today and tells him that she wishes to be his 'Dharampatni'.

© Copyright tellybest.com, 2022, 2023. All Rights Reserved. Unauthorized use and/or duplication of any material from tellybest.com without written permission is strictly prohibited.
Cached Saved on: Wednesday 25th of January 2023 12:32:19 PMCached Disp on: Wednesday 1st of February 2023 09:05:58 PM