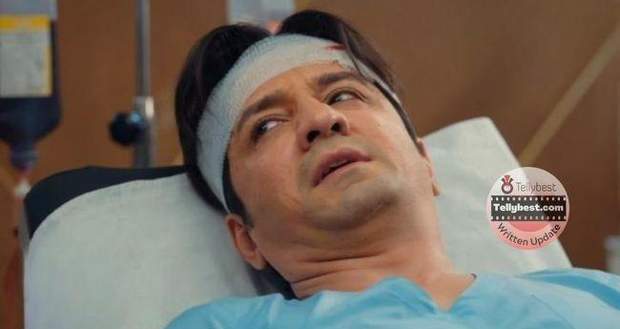 When Kavya sees Mandeep, she immediately lies, saying they belong to Keerti.

However, when Mandeep reads another note on which it is written "we will make our different love story", she realizes that it is written by Kavya, not Keerti.

Mandeep asks Kavya what is all this and Kavya breaks down at having her secret revealed.

She says that she always thought that Ravi will prefer her over Keerti but she didn't.

Mandeep then asks Kavya if she would be able to take care of Ravi more than Keerti and Kavya says yes.

On the other hand, Pratiksha thanks Pratik for saving her and says that her father must be proud of her Chachu.

Meanwhile, Malhar goes to Thakur to inform him that Pratik is still alive and gets slapped by him.

At Keerti's house, Mandeep tells Manvi and Gulshan about Kavya loving Ravi all these years and proposes that Ravi and she should get married.

Kavya's parents get shocked and question Kavya what is all this.

Unable to face the rejection from her parents' side, Kavya locks herself in a room and picks up a knife to self-harm.

Manvi, Gulshan, & Mandeep all knock on her door but she doesn't open it.

Mandeep then calls Ravi to come to Keerti's house while all the adults find Kavya trembling on the floor with her wrist sliced.

At Parekh House, Hansa tells Pratiksha to act all bridal-like as she is yet to marry Malhar.

Partiksha hesitates at the word marriage while Malhar comes and Hansa playfully elbows Pratiksha to make Malhar hers before he gets swept by someone else.

When alone, Partiksha tells Malhar that she still has a question on the night as to who killed Keerti.

The doctor comes to help dress Kavya's wound while Ravi gets shocked to see the incident.

Mandeep then reminds Ravi of Keerti's promise and urges him to marry Kavya.

Later, Manvi tells Gulshan that she cannot lose one more daughter and says Ravi will never be able to accept Kavya as he loved Keerti a lot.

Gulshan stays silent while Kavya wakes up from her slumber and says sorry to him.

Gulshan hugs her and says he wants the best for Kavya as it will be a one-sided marriage.

Kavya nods her head at Ravi's proposal & Gulshan and Manvi accept their union.

© Copyright tellybest.com, 2022, 2023. All Rights Reserved. Unauthorized use and/or duplication of any material from tellybest.com without written permission is strictly prohibited.
Cached Saved on: Friday 27th of January 2023 12:03:38 AMCached Disp on: Sunday 5th of February 2023 02:47:02 AM