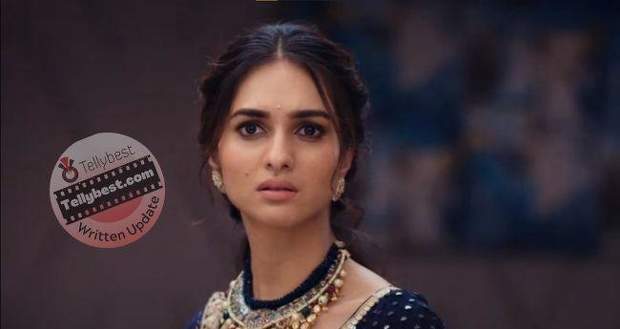 Today's Dharam Patni 27th December 2022 episode starts with Kirti holding Ravi's hand as she tells him that she cannot share him with anyone.

She emotionally asks him if no one will come in between them and he sheds a tear as he says that they will never be separated.

Kirti tells him to not give anyone else the love he has for her and he nods as he asks her why she is getting emotional like him.

She holds his face and pecks his forehead while Kirti's father interrupts them and tells Ravi to come.

He leaves while Ravi tells Kirti that he will come in a while.

However, Kirti gives him a peck on the cheek and leaves getting shy while Ravi sheds a few tears of joy hoping that Keerti keeps on being this romantic.

On the other hand, Kavya gets angry seeing them and goes to take tissue papers from a waiter.

Afterward, she holds Ravi in place forcefully as she wipes away the traces of the kiss from his cheeks.

He asks her if she's drunk while Kavya tells her that it does not matter.

Ravi says that she is right and leaves while Kavya rushes to her room in tears.

Meanwhile, Kirti is in her room when someone tries to open the door and knocks on it.

Kirti goes thinking that it must be either Kavya or Ravi.

On the other hand, Ravi calls Keerti thinking to tell her about Kavya's confession and her actions.

Keerti sees Ravi calling her and thinks that it must be Kavya at the door.

She recalls how Kavya used to apologize to her after fights when they were little.

Keerti opens the door and gets confused as she sees three waiters.

At the same time, Kavya destroys her room in anger as she gets frustrated thinking about Keerti's words to her.

Amaira comes there and tries to calm Kavya thinking she is just acting like this because she is angry.

However, Kavya says that she will bring down fire on those who try to separate her from her Ravi.

Meanwhile, Thakur, Raghu, and the third goon barge into Kirti's room and lock it from the inside while she keeps on asking them who they are.

Thakur removes his disguise and laughs when Kirti is still not able to recognize him.

He finally reveals to Keerti that he is Kamal Thakur who does drug trafficking and whom she has filed a PIL against.

Keerti feels threatened and is about to shout when Thakur pulls out a gun and aims it at her head telling her that she will be dead even before anyone is able to come to the room.

Elsewhere, Malhar is talking to his friend about manipulating and doing emotional drama to get related to Pratik Parekh.

However, Hansa comes there just then and tells Malhar that he should be making good connections with the DIC to get his job.

He goes to the DIC and boasts about his skills while saying that he is very inspired by Pratik.

The DIC gets a call just then and gets happy as he informs Pratik that the raid they did on the abandoned factor has been successful.

Pratik asks about it and the DIC reveals that they are talking about the one that was owned by Kamal Thakur which worries Malhar.

Keerti tries to escape while Thakur pushes her to the ground and tells her that her time is up.

The other goon brings a metal rod with two ends sticking out from opposites while Thakur takes it in his hand and reminds Keerti about a brutal murder.

He reveals that he is the one who did it.