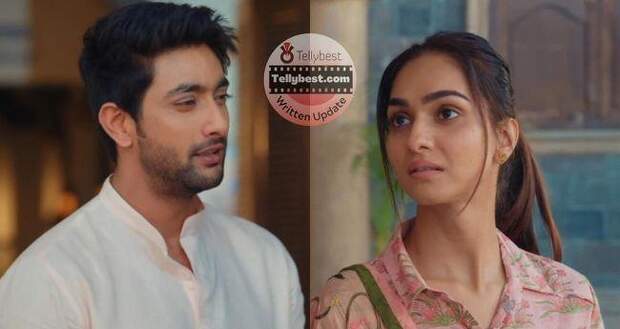 Pratik tells Pratiksha that he knew she would be upset seeing any news about Ravi while Prateeksha thinks that Ravi forgot Kirti so soon and moved on with Kavya.

She thinks that she will remove this tag of the murderer from her head at any cost.

At Randhawa's house, Biji blesses Kavya and Ravi while Amardeep (Ravi's father) tells Gulshan that he knows the happiness is not the one they had wished for but they need to move on for their kids.

Gulshan agrees as he says that they have found happiness in Kavya's happiness and requests Amardeep to take care of his daughter.

Amardeep jokingly calls him drama queen as he says that Kavya will be happier in his house with Ravi than the Sachdeva house.

Back at Parekh house, Hansa sits with Pratiksha and asks her what she will call her after marriage to which Pratiksha gets emotional.

Ravi goes to his room and talks to Kirti's picture while Amaira comes there and tells him that the family is waiting for him downstairs.

She sits beside him and asks him why he is feeling sad when he himself agreed to this marriage while Ravi reveals to her that he feels as if something is being left behind.

However, Amayra tells him to not give this relationship the tag of an exchange deal and tells him that Kavya is the best option for him to move on from what happened.

Mandeep comes there and comforts him after which she wipes away his tears and tells him to come downstairs.

Meanwhile, Adi's mother fights with her husband for wearing cheap clothes and taunts him that he should have worked harder to become like the Randhawa's.

Elsewhere, in the market, Kinjal and Parul walk excitedly talking about the marriage while the loafer who is after Kinjal comes there and blocks their path again.

Kinjal threatens to call the police while he taunts her about Pratiksha being a killer.

Pratiksha comes there just then and makes the guy go away while Kinjal and Parul get happy seeing her.

She tells them to go home while she goes and distributes the cards herself.

Back at the Randhawa house, Kavya holds Ravi's hand but he tells her that he feels a little uncomfortable since only Keerti had held his hand till now.

Kavya says that she understands and lets go of his hand while he sees Gulshan attending a call in the middle of the event.

Ravi stands from the couch and asks him what happened while Gulshan hesitantly informs him that Pratiksha is out on bail.

Ravi gets angry and is about to rush out of the house but the whole family stops him and tells him to do the engagement first.

Biji tells him to remember Kirti's wish for him to get married to Kavya and makes him sit back down.

Ravi brings out his hand and Kavya slides the ring onto his finger while he keeps thinking about Keerthi.

He slides the ring onto Kavya's finger while he thinks to himself that Pratiksha will end up in jail at any cost.

© Copyright tellybest.com, 2022, 2023. All Rights Reserved. Unauthorized use and/or duplication of any material from tellybest.com without written permission is strictly prohibited.
Cached Saved on: Friday 27th of January 2023 11:58:39 PMCached Disp on: Thursday 2nd of February 2023 07:32:19 PM