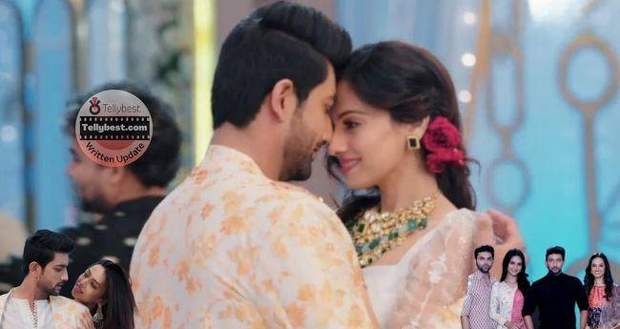 Today's Dharam Patni 28th December 2022 episode starts with Thakur telling Keerti that he is the one who killed the girl whom she was trying to help.

Keerti gets shocked to hear Thakur and understands that she is in grave danger as she is surrounded by those dangerous gangsters.

Keerti joins her hands and asks Thakur to let her go as she wants to live peacefully.

Meanwhile, Pratiksha spots Ravi ignoring Kavya’s call, and tells him that he should respond to her.

Ravi asks Pratiksha how she can be so sure that he can hear Kavya’s call in a mocking tone.

Kavya comes and asks Ravi why he is talking with Pratiksha as she is not his class from any angle.

Pratiksha tells Kavya that she was only telling Ravi about her calling him to which Ravi responds that she does not need to interfere between him and Kavya.

Pratiksha gets offended and asks Ravi why he is supporting Kavya when he was not ready to hear her voice a minute ago.

Kavya asks Pratiksha to shut up and takes Ravi with her when they bump into Keerti’s mom.

Keerti’s mother tells Ravi that he cannot go to Keerti’s room as she is busy with her makeup and takes him with her.

As the planning of the sangeet start, Kavya proposes that she should have a dance with Ravi and asks him to accompany her.

Ravi tries to get away but gets dragged in by Kavya as she starts dancing with the commencement of the music.

At the same time, Thakur tells Keerti that she should not have dared to go against him and now she has to die for her actions.

Keerti requests Thakur to leave her as she is going to get married to Ravi whom she loves.

Ravi goes toward Keerti’s room but gets stopped by Kavya who asks him why he is acting so rude to her.

Kavya tells Ravi that she loves him madly and can do anything for his sake.

As Kavya insults Keerti, Ravi makes it clear that she can never replace Keerti and that he only loves Keerti.

Kavya goes behind Ravi and takes him to a room while Ravi gets angry seeing that behavior.

On the other hand, Keerti hits Thakur on his head and escapes to another room, and locks the door.

Keerti gets frustrated as Ravi does not pick up her phone and calls Pratiksha instead.

However, Thakur comes and snatches the phone before Keerti can tell anything to Pratiksha.

Pratiksha gets worried and goes upstairs but Malhar holds her hand asking her to listen to his commands.

As Pratik comes, Pratiksha leaves while Malhar determines to teach Pratiksha a lesson in the future.

Ravi stops Kavya from cutting her wrist and says that she is crazy and asks her to stay away from him and Keerti.

Keerti shakes in fear as Thakur smashes her phone and tries to jump from the window but gets caught by Thakur.

© Copyright tellybest.com, 2022, 2023. All Rights Reserved. Unauthorized use and/or duplication of any material from tellybest.com without written permission is strictly prohibited.
Cached Saved on: Wednesday 25th of January 2023 04:58:48 PMCached Disp on: Monday 6th of February 2023 04:57:18 AM