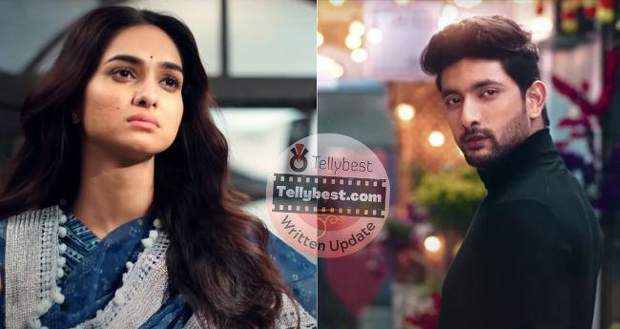 Today's Dharam Patni 28th November 2022 episode starts with the beautiful scenery of Junagadh, Gujarat while a school scene is shown where the students are creating a hevoc and having fun.

Teacher Halki asks Teacher Fulki when Pratiksha will be coming to which Fulki reminds her that Pratiksha is on leave today.

The principal comes there and gives punishment to the kids while Halki and Fulki feel bad for the kids thinking that they would have been spared if Pratiksha was there.

Back at the Parekh house, Bhairvi wakes up Kinjal by throwing a glass of water at her and asks her about her sister.

Kinjal wakes up from her sleep and goes to call her sister Pratiksha while telling her mother that she hopes Pratiksha doesn't go to school on her off day.

Meanwhile, at school, Pratiksha brings cake for the students as it is Niharika's birthday while surprising the kids.

Halki-Fulki informs her about the Principal being upset while Pratishka informs them that it is the Principal's birthday too.

Pratiksha goes to the principal's office with the kids and wishes her a happy birthday while the principal gets emotional saying that even her own daughters did not remember her birthday.

Just then, Kinjal comes there and informs Pratiksha that Bhairvi is getting angry waiting for her.

Later, the whole Parekh family gets ready for the dandiya night while Bhairvi tells Pratiksha that she has invited her to be in-laws at the Pandal directly for the celebration.

The sisters tease Pratiksha while Hansa comes there and greets everyone while telling everyone about the problems she faced while arriving there.

Afterward, they all reach Pandal where Pratiksha's fiance, Dhaval is dancing with another girl.

Kinjal and Pratiskha's younger sister goes there and injures the girl while teasing Pratiksha.

However, Pratiksha asks the girl if she is fine and the girl leaves saying that she is fine.

Dhaval asks Pratiksha for a dance and she gets shy as she apologizes to him saying that she promised Chachu that she will dance with him first.

Dhaval nods at her calmly while she leaves and goes around with Hansa.

Niharika sees her teacher and greets Pratiksha while Pratiksha also greets her happily.

Niharika's mother greets Pratiksha happily while telling her that she is happy her daughter has someone she can rely on other than her mother.

Afterward, everyone dances on the ground while Dhaval takes Pratiksha away from everyone else and tries to get close to her.

However, she moves away from him which irritates him.

Dhaval tells Pratiskha to not be hesitant as they are going to get married in a few months.

Just before Dhaval can do anything more, Kinjal comes there and seeing Pratiksha's expression, takes her away from there.

Further, Kinjal jokes with Pratiksha saying that she should have kissed Dhaval.

Later, Niharika's mother rushes around asking for help while Pratiksha sees her and asks ehr what is the problem.

Niharika's mother rushes her to the lit-up house saying that her daughter is stuck at the top.

Pratiksha requests Dhaval to save Niharika but he tells her that they should not meddle in other's business and emphasizes that he is scared of the fire.

Seeing no other option, Pratisha brings a wet log of wood from the side and puts it in a way that she can climb and bring Niharika down.

On the other hand, Diksha and her husband tell Jignesh and Bhairvi that they have to give some money during the engagement as Shagun.

Jignesh and Bhairvi look at each other and tell Diksha that they will surely make sure all the necessary things are done.

Back at the Pandal, Pratiksha manages to save Niharika and come back down safely while Kinjal hugs her feeling grateful that her sister is fine.

Pratiksha tells her to not inform their parents about the truth.

Later, the day of the engagement comes and Bhairvi packs her purse while telling Pratiksha that she has some work to finish and will be back soon.

Pratiksha gets hesitant while her mother tells Hansa to get Pratiksha ready for the engagement.

Jignesh and Bhairvi go to the mall to get the things requested by Dhaval's parents when a group of terrorists hijack the whole mall.

Pratiksha and her sisters learn the news and gets worried while Hansa tries to calm them.