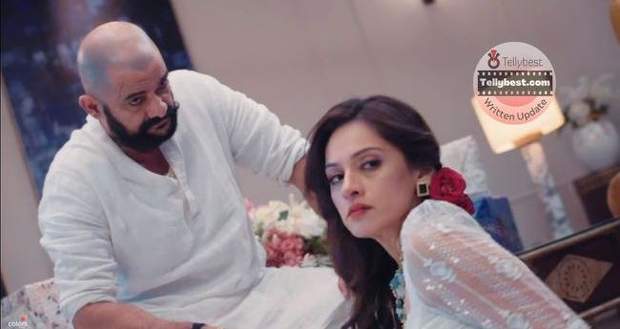 Today's Dharam Patni 29th December 2022 episode starts with Ravi trying to stop Kavya while she throws away the blade and tells him that she loves him.

She tells him that his love will not be taken away from him since he did not return her love.

Ravi pushes her away and she falls while he rushes to help her.

She asks him if he loves her or not while Ravi tells her that the love he had was for Kirti's younger sister and not the obsessed Kavya.

Ravi calms Kavya telling her that she is right about a person falling in love only once.

However, he takes Kirti's name saying that he has promised his love and the next lives also to her since he loves her.

Kavya argues with him telling him that he and Kirti will get bad wishes from her while he shouts at her to stop.

On the other hand, Pratiksha knocks on a door while Kirti makes a noise hoping to be heard by anyone.

Elsewhere, Jugni is doing a veneration when she sees a vision run to the idol of the Goddess saying that she saw blood and that the death of the girl is confirmed.

At the same time, the door to Kirti's door opens while Jugni begs the Goddess to not kill the girl and take away her life on her special day.

Jugni requests the priest to do something while he says that the death and the birth of a person are written at the same time and that they cannot delay it.

Back at the mansion, Ravi is about to leave when Kavya tells him that he will not get his love too.

Ravi gets back inside and again tries to explain to her that he knows she is crazily in love with him but he does not love her like that and that he loves only Kirti.

Ravi makes her drink coffee with his swear while he tells her that she does not even understand what love is.

Kavya says that she is love herself while he tells her that he will never talk to her again if she does something like this again.

Ravi tells her that it is good then as she requests him for one last hug.

At the same time, Jugni comes there to warn Kirti's family while Keerti's mother makes the security escort her.

Jugni stumbles upon Hansa and states that the change is about to happen while blaming Hansa for being the reason behind it.

She looks at Kinjal and tells her to save her sister while the security takes her away.

On the other hand, the goon takes some tissues from the waiter and closes the door while Thakur continues scolding Raghu for hitting Kirti in the head.

He says that he is glad Kirti is not unconscious yet as she is still awake while Keerti's phone goes off with Pratiksha calling her.

Meanwhile, Pratiksha finds Ravi and Kavya hugging and calls out to Ravi.

She tells him that she cannot connect to Kirti and he rushes to get his phone and call her.

On the other hand, Thakur hits Kirti on the head but the blood gets into his eyes making him distracted.

Keerti is still conscious and manages to escape from the room while the goons go after her.

She enters the elevator and continues pressing the button hoping that the doors close before the goons can reach her.

However, Thakur comes and is about to enter with style while Kirti pushes him towards Raghu and the elevator is about to close.

Keerti falls on the floor of the elevator while Thakur calls the other goons and tells them to clean up the room of blood.

Meanwhile, Aayush informs Thakur their goons have arrived at the mansion.

At the same time, Ravi and another aunty are also waiting by the elevator to go to Keerti's room.

© Copyright tellybest.com, 2022, 2023. All Rights Reserved. Unauthorized use and/or duplication of any material from tellybest.com without written permission is strictly prohibited.
Cached Saved on: Wednesday 25th of January 2023 02:36:51 PMCached Disp on: Monday 6th of February 2023 04:58:34 AM