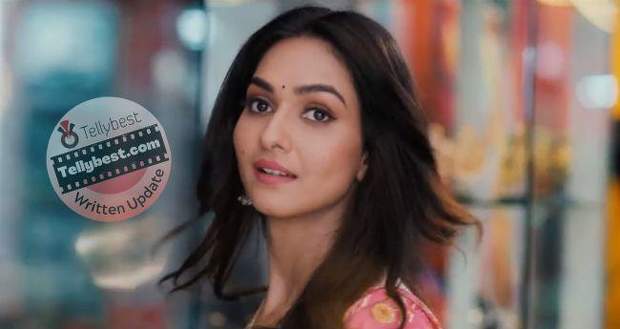 Today's Dharam Patni 29th November 2022 episode starts with Pratiksha and Kinjal running out of the house after seeing the news about the terrorist attack at the mall where her parents are trapped.

Jignesh's brother tries to go after them but Hansa stops him saying that he should use his brains and contact his connection to ask for help.

Meanwhile, Jignesh and Bhairvi get caught by a terrorist who attacks them and keeps slapping Jignesh asking if he thinks he is smart.

Kinjal and Pratiksha see the terrorist taking her parents by force and get angry while the police stop them.

Back inside the mall, Jignesh tells Bhairvi to hide while he goes upstairs and finds a solution for them to escape.

Bhairvi holds his hand and she tells Jignesh that she will not go home without him.

Jignesh consoles her after which he goes upstairs and manages to bring himself to take the gun from the dead body of the security guard.

Further, he follows the path toward the fire exit but gets shocked as he sees many people being held hostage.

He sees the terrorist threatening to kill an innocent man and shoots at his leg which alerts the other terrorists.

Jignesh hits the terrorist on the head with the butt of the gun and knocks him out.

Bhairvi comes there just then and tells Jignesh about the other terrorists looking for him while they both help the people go out through the fire exit.

Meanwhile, Pratiksha manages to enter the mall through the back entry while Kinjal asks her if she's sure she is not scared.

Jignesh tells Bhairvi to go while he brings back the bag of jewelry from the ground floor.

However, as Jignesh leaves, Bhairvi goes back inside the mall not being able to leave her life partner alone in a situation like this.

Meanwhile, Jignesh and Pratiksha see each other and get happy while Bhairvi sees them from the upper floor of the mall.

However, just then, a terrorist shoots at Jignesh and injures his leg while Bhairvi throws something at the terrorist and distracts him.

She shouts at Pratiksha to take Jignesh to safety and goes away from there.

Pratiksha hides Jignesh in a restaurant and tells him to stay there while she goes to find her mother.

Further, Pratiksha finds her mother and is about to take her to a shelter when they both come in front of a terrorist.

They try to run away from him while he shoots at Bhairvi and hits her right where her heart should be.

The police also arrive there at the same time and shoot the terrorist while a female constable shouts to arrange an ambulance.

However, Bhairvi tells Pratiksha to take her to Jignesh as she doesn't have much time left.

Pratiksha tries to keep her tears at bay as she helps Bhairvi go towards the restaurant saying that Jignesh will scold her once he hears her words.

However, they both enter the restaurant and get shocked to see Jignesh's body lying on the floor with a bullet shot through the chest.

Pratiksha starts crying while not able to believe that she has lost her father while Bhairvi puts her hand in Jignesh's hand before taking her last breaths.

Kinjal comes there at the same time and gets shocked to see the sight in front of her.

Later, the Parekh family passes their day in agony as they complete the funeral rites.

After a fortnight, Dhaval and his parents come to the Parekh house to talk about the marriage.

Pratiksha requests time from them saying that she cannot think about marriage before helping her sisters settle down.

However, Dhaval convinces her to agree by saying that her parents would have wished the same.

© Copyright tellybest.com, 2022, 2023. All Rights Reserved. Unauthorized use and/or duplication of any material from tellybest.com without written permission is strictly prohibited.
Cached Saved on: Wednesday 25th of January 2023 06:28:14 PMCached Disp on: Wednesday 1st of February 2023 10:09:47 PM