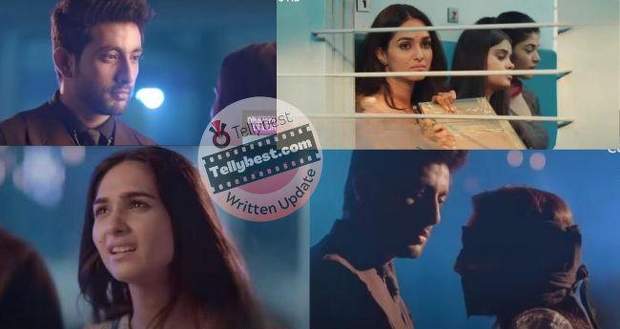 Today's Dharam Patni 2nd December 2022 episode starts with Kirti calling Ravi and telling him to come and save her or else she won't talk to him ever again.

Pratiksha questions her life while the goons catch Kirti again.

On the other hand, Pratik gets worried for Pratiksha as he starts leaving the room while Hansa and others stop him saying that they should wait for 10 minutes more.

At the same time, Ravi reaches the Duggal place and whistles a special tune to indicate to Kirti that he is there.

However, when he doesn't get a response, he thinks that Kirti is in danger and finds a window to crawl inside.

He sees Pratiksha in the dark-lit room and starts talking to her without any manner thinking that she is Kirti.

Meanwhile, Pratiksha wonders who this guy is and tries to ask him but it comes out muffled due to the cloth in her mouth.

Ravi unties Pratiksha's blindfold and the cloth from her mouth realizing that she is not Kirti.

However, the goons come there just then and Ravi starts beating them while Pratiksha helps him by beating the goons with a metal road.

At the same time, Malhar also reaches the Duggal industries and finds Pratiksha's dupatta there while Hansa calls him and berates him.

Ravi thanks Pratiksha for helping him and leaves to save Kirti while Pratiksha wonders what to call him since she didn't see him or know his name.

Meanwhile, Ravi manages to distract the goons with fire while he undoes the ties.

Ravi and Kirti get into an argument as she tells him that she will be relieved if they separate which hurts Ravi's feelings.

However, instead of consoling him, she tells him to save the girls on the other side of the room and goes the other way.

Further, Ravi mistakes Malhar for a goon and starts beating him up to impress Kirti who is acting unimpressed.

Malhar shouts that he came to save a girl and shows them Pratiksha's photo which confirms his suspicions.

Afterward, Malhar again gets mistaken as a goon by Pratiksha who beats him.

Malhar shouts that he came to save her and was sent by her Chachu-Chachi.

Pratiksha apologizes to him when the police come there and mistakes Malhar for a goon for the third time which both bruises his ego and his previous face.

Later, the police thanks Ravi and Kirti while Pratiksha tells Malhar that she will thank them and be back.

Ravi leaves with the police while Pratiksha again thanks Kirti for saving her.

Afterward, Malhar brings Pratiksha to Parekh's house while Hansa makes it a big deal to tell Pratik that he should thank Malhar.

Hansa puts pressure on Malhar's bruises and points them out to Pratik while Malhar's blood boils thinking about the way Ravi beat him up.

Pratiksha goes to her room with her sister who teases her about the hero (Ravi) saving her and how she should have romanced him.

On the other hand, Ravi parks at Kirti's house and she gets out of the car angrily while he tries to talk to her.

However, her dupatta gets stuck in the car door and she talks to Ravi thinking that he is stopping her from leaving by holding her dupatta.

© Copyright tellybest.com, 2022, 2023. All Rights Reserved. Unauthorized use and/or duplication of any material from tellybest.com without written permission is strictly prohibited.
Cached Saved on: Wednesday 25th of January 2023 05:27:05 PMCached Disp on: Tuesday 31st of January 2023 07:04:20 PM