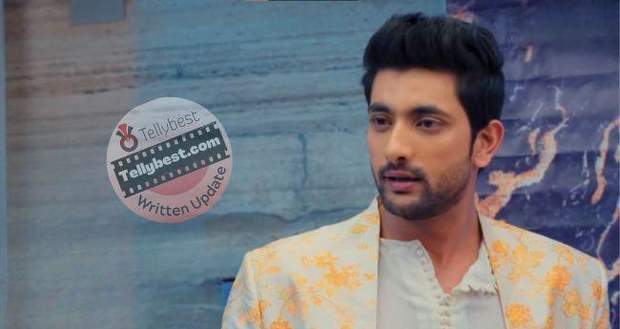 Today's Dharam Patni 2nd January 2023 episode starts with Malhar waking up from his hangover as he realizes that he has run over someone.

He gets anxious as he gets out of the car and checks Keerti.

He realizes that Keerti is alive and gets worried about his name being in the hit-and-run.

All this while, someone is recording the whole scene on mobile of Malhar driving the car in reverse and them coming back to put Keerti's body on the sideroad.

As Malhar touches Keerti's hand and finds no pulse, he realizes that someone is there and escapes from there.

Raghu turns off the recording and leaves while the rain stops and some people find Keerti's body.

Elsewhere, Malhar gets worried as he keeps on recalling the incident in his head while his hand has blood drops on them.

Hansa tells Pratik to go with Kinjal and Parul in the rickshaw as she will come in the car with Malhar and Pratiksha.

Pratiksha says that she will go check on Malhar while Kinjal goes back inside to get the phone cover she left inside.

At the same time, someone rushes inside the venue and informs everyone that a girl is lying on the road in critical condition dressed in white.

Ravi rushes to see the girl feeling an overwhelming sensation and he gets shocked to see that the girl on the road is none other than Keerti.

Meanwhile, Malhar sees the police inspection and goes back to the road where Kirti's body is lying.

He gets worried and stops the car as he sees a crowd gathered near the body.

Kirti's family also arrives at the scene and cries seeing Keerti in a bloodied state while Ravi shouts to call the ambulance.

Pratiksha also arrives at the same place and walks towards the crowd when she gets a call from Hansa.

Hansa tells her to come fast as she is tired of standing while Kirti longingly looks at the crowd feeling a pull as she turns back and goes towards the car in which Malhar is.

Pratiksha asks him what has happened and he subconsciously says an accident.

Pratiksha says that she should go to help them while Malhar drags her to the car saying that they are late.

As they buckle up, Thakur and his goons also stand with the crowd to find out whether Keerti is alive or not.

A doctor comes there just then and checks Keerti while Ravi begs his mother to make Keerti talk.

The doctor checks Keerti's pulse and says that she is no more while Keerti's father starts arguing with him.

Thakur leaves with a calm feeling thinking that Keerti has died.

Meanwhile, Malhar overhears two people talking and saying that the girl is dead.

Ravi tells the crowd that he can feel Keerti and the doctor checks again as he nods and says that there is a faint pulse.

Ravi hurriedly puts Keerti in the car and argues with her father to drive the car saying that he will reach the hospital soon.

On the other hand, Pratiksha tells Malhar that she knows what he has done.

He thinks that she is talking about the hit-and-run and apologizes to her while begging her to not tell anyone about it.

However, he gets calm once he realizes that she is talking about him drinking alcohol.

Just then, Ravi overtakes their car as he keeps talking to the unconscious Keerti telling her to stay in there.